Students of the Lowline Young Designers Program ponder the revolutionary public park to be created beneath the city’s sidewalks. 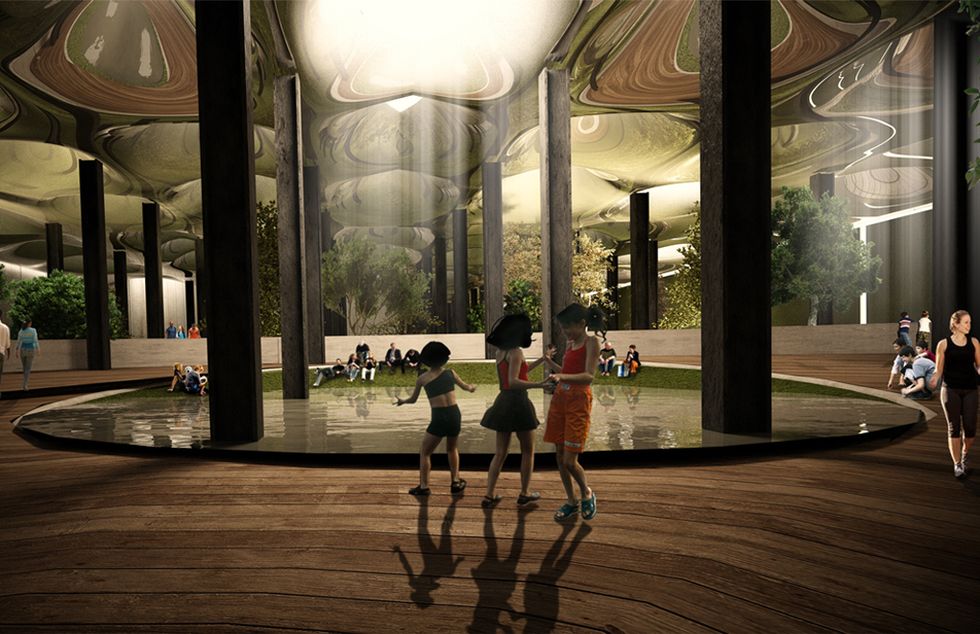 As buildable land for public works projects in NYC becomes scarce, those with a commitment to the communal have had to get creative with their thinking. Though the Highline is the golden child of recent developments—providing not just a nifty tourist attraction, but also an inventive way to create parks in a cramped city—the proposed Lowline is poised to bring this ingenuity underground. Still in the development stages, the Lowline park will use solar technology to light and power the historic Williamsburg Bridge trolley terminal, closed in 1948, which lies beneath Delancey Street on the Lower East Side. According to the Lowline’s press release, “Our vision is a stunning underground park, providing a beautiful respite and a cultural attraction in one of the world’s most dense, exciting urban environments.” The park would also sit adjacent to the JMZ subway stop at Essex Street, allowing a seamless integration into the city’s transportation lifeblood. So far, plans for the Lowline have been endorsed by the vast majority of elected officials, local community leaders, and senior officials in New York City Mayor Bill DeBlasio's administration. Hopefully, with proper capital and the go-ahead from the city, construction on this ambitious project will commence within the next five years. Recently, 3-D renderings of the future underground Lowline park went on display at the Mark Miller Gallery, generated by local students as part of the organization's Young Designers Program. The initiative was launched to give kids an opportunity to “design their neighborhood park” and make science, tech, engineering, arts and math (STEAM) fun and interactive. The Lowline Young Designers Program (YDP) is part of a larger, immersive after-school initiative meant to encourage hands-on youth education in the neighborhood, making it a truly organic project. The Lowline team partnered with some of the area’s largest and oldest community organizations—including Asian Americans for Equality, Educational Alliance, Grand Street Settlement, Henry Street Settlement, University Settlement, and the 14th Street Y. The students, working in collaboration, translated their findings and design concepts into physical 3-D models, and exhibited them at the gallery alongside photos and written narratives.

During the exhibit’s one-week residency (March 22nd-29th), it received over 1,000 visitors, who were led on private tours by local organizations, as students participated in a hands-on demonstration of the solar technology, fiber optics, and light dynamics that will make up the park. Students were prompted to write, draw, or “map a story” about solar technology (or any other technology) and how it impacts the way we live. The work was later mounted on the gallery walls, and presented to the group as well as visitors. “I love seeing kids get excited about a creative idea,” says Dan Barasch, co-founder and executive director of the Lowline. “Why not build a trampoline park?” says Barasch on one of the ideas tossed out for consideration. “Why not have an ice skating rink in summer? And then encouraging them to think about the steps you need to take to make a crazy idea happen.” Barasch, whose former roles at Google, PopTech, and within New York City government have all contributed to his ability to realistically “think outside the box,” had the idea for the initiative after meeting with the community to discuss plans for the park.

A few of the Young Designers on display. Image courtesy of Andrew Einhorn/The Lowline

“Members of the local community—parents, teachers, community leaders—began reaching out to us very early in our process to share more about our idea, and it became clear that kids were extremely excited. I remember I was first invited to speak about the Lowline at a huge high school in the neighborhood, in a huge auditorium. When I revealed an image of the proposed future Lowline design, I heard a bunch of kids in the audience just fall silent, and many exclaimed something like "wow!" At that moment and in many others, I realized we had the potential to teach kids how powerful STEAM can be in shaping our built environment—but in a fun way, not a textbook way. And at the same time, it would be a wonderful way for us to learn more about what kids in the community thought about the project- and how the Lowline could serve their needs and dreams for the future.”

The Lowline, when finally completed, will be a modern marvel of design. Through the use of solar technology, sunlight will be delivered below the city surface, allowing plants to grow entirely within this man-made photosynthesis process. While we’ll have to wait to see what this project will look like when it launches, scroll through our slideshow to get a sense of what we can expect in 2020.

A (tiny) hint of what’s to come. Image courtesy of Andrew Einhorn/The Lowline