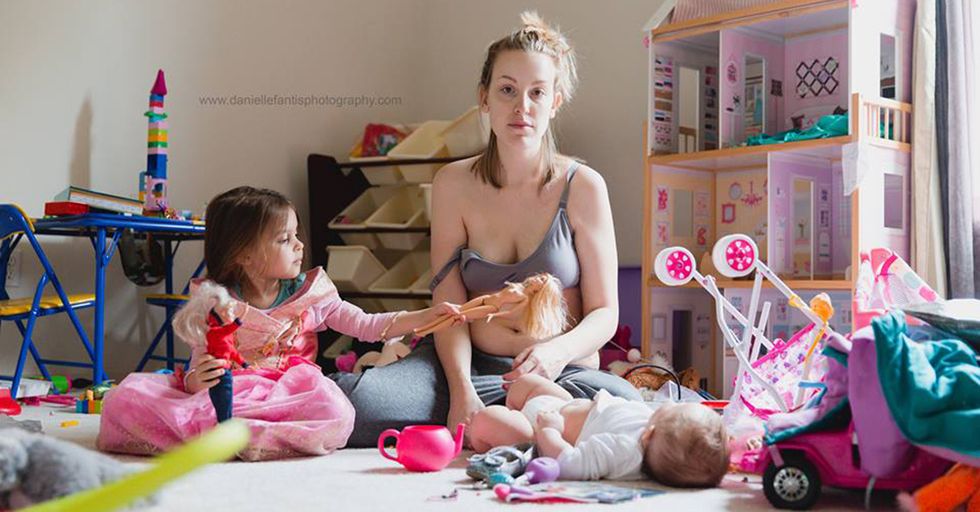 Even after being presented with loads of clinical and anecdotal evidence, many people have a hard time wrapping their head around the concept of postpartum depression. Mental illnesses, in general, manifest themselves in myriad of ways, and with so much changing in the life of a new mom, it’s hard for even the sufferer herself to recognize what’s going on.

In the spirit of creating awareness in a simple but stark manner, Kathy DiVincenzo wanted to reveal what goes on behind the facade that glowing new mothers are expected to display. The conflicting realities were present in her own life, and she was, fortunately, quick to recognize them. “The only photos I’m posting are of my new baby smiling, and his sister kissing him. All these amazing moments are real, of course,” she said to the Today show. “But there’s that flip side, this other side of reality that I wasn’t comfortable showing.”

To share her story, Kathy teamed up with her friend, photographer Danielle Fantis to visually reveal the duality new moms face, especially those suffering from postpartum mental illness, as she was. Kathy realizes in hindsight that she experienced postpartum anxiety following the birth of her now 3-year-old daughter. It was only when the symptoms came on again following the birth of her 3-month-old son that she recognized the pattern and the affliction.

Realizing that the symptoms can often be overlooked even by the mothers themselves, she posted photos showing the dueling nature of new motherhood.

The photographer, Danielle, posted a message as well as the original post spread and garnered interest:

In explaining the illness, Kathy spoke bluntly about how none of it makes sense on the surface, especially when mothers are hiding their suffering in the face of social pressure to “beam.” She says, “I remember thinking: I have no reason to be sad. I have this good life, this beautiful healthy baby. Everything is great. But that’s the thing with postpartum depression and mental illness. It doesn’t discriminate. No one is safe.”

It may sound like a bleak takeaway, but Kathy’s effort have helped many realize what they are going through or have gone through, giving a voice and an identity to the complex and bizarre feelings. She says, "So many mothers have said, 'Oh, I didn’t know this had a name. This is describing my life.’”

“The main point of all this is to tell people you’re not alone in what you’re experiencing."