Barack Obama wrote a beautiful letter to a 10-year-old girl who was being bullied about her gay parents.

“In America, no two families look the same. We celebrate this diversity. And we recognize that whether you have two dads or one mom what matters above all is the love we show one another.” 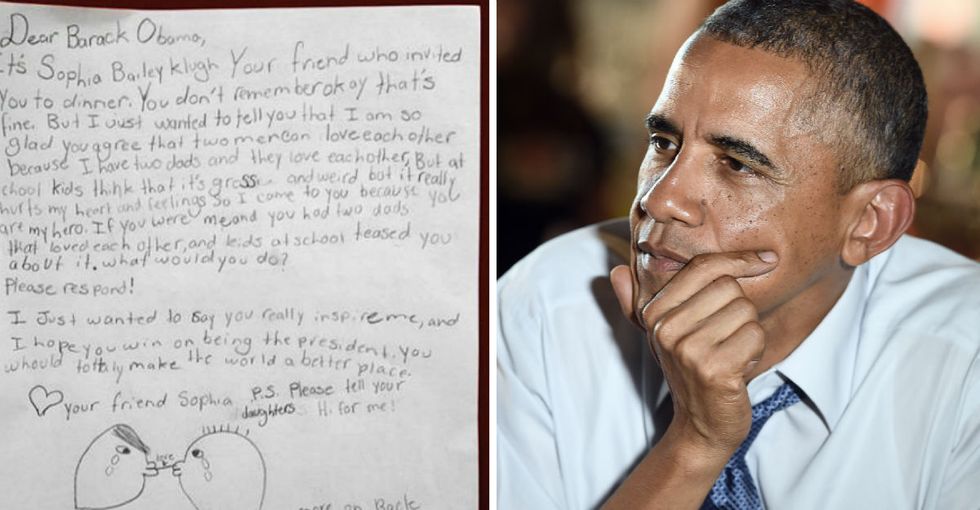 Back in 2015, the Supreme Court’s decision to support marriage equality changed America for the better. In the realm of politics, it effectively put “the marriage debate” to rest. And the vast majority of America has followed suit, with polls showing ever-growing majority support for marriage equality.

However, that doesn’t mean the fight for true LGBTQ equality is over. Case in point came in 2012, when then 10-year-old Sophia Bailey-Klugh wrote a letter to President Obama thanking him for coming out in support of marriage equality during the presidential election but also expressing concern over how her classmates were responding to her two fathers:

It's Sophia Bailey Klugh. Your friend who invited you to dinner. You don't remember okay that's fine. But I just wanted to tell you that I am so glad you agree that two men can love each other because I have two dads and they love each other. But at school kids think that it's gross and weird but it really hurts my heart and feelings. So I come to you because you are my hero. If you were me and you had two dads that loved each other, and kids at school teased you about it, what would you do?

I just wanted to say you really inspire me, and I hope you win on being the president. You would totally make the world a better place.

P.S. Please tell your daughters Hi for me!

Not only did President Obama respond, but he also addressed all of Bailey-Klugh’s request. And yes, that includes saying “hello” to his daughters for her. The letter is a master class in dignity and compassion. Like the best of all presidential letters, Obama also uses it as a teaching moment, knowing on some level that the letter will likely circulate far and wide beyond the eyes of one 10-year-old child:

Thank you for writing me such a thoughtful letter about your family. Reading it made me proud to be your president and even more hopeful about the future of our nation.

In America, no two families look the same. We celebrate this diversity. And we recognize that whether you have two dads or one mom what matters above all is the love we show one another. You are very fortunate to have two parents who care deeply for you. They are lucky to have such an exceptional daughter in you.

Our differences unite us. You and I are blessed to live in a country where we are born equal no matter what we look like on the outside, where we grow up, or who our parents are. A good rule is to treat others the way you hope they will treat you. Remind your friends at school about this rule if they say something that hurts your feelings.

Thanks again for taking the time to write to me. I'm honored to have your support and inspired by your compassion. I'm sorry I couldn't make it to dinner, but I'll be sure to tell Sasha and Malia you say hello.