These Activists Were Fed Up With The Education System, So They Came Up With Their Own

“We’re the last to be thought of and the first to have our funding cut.” 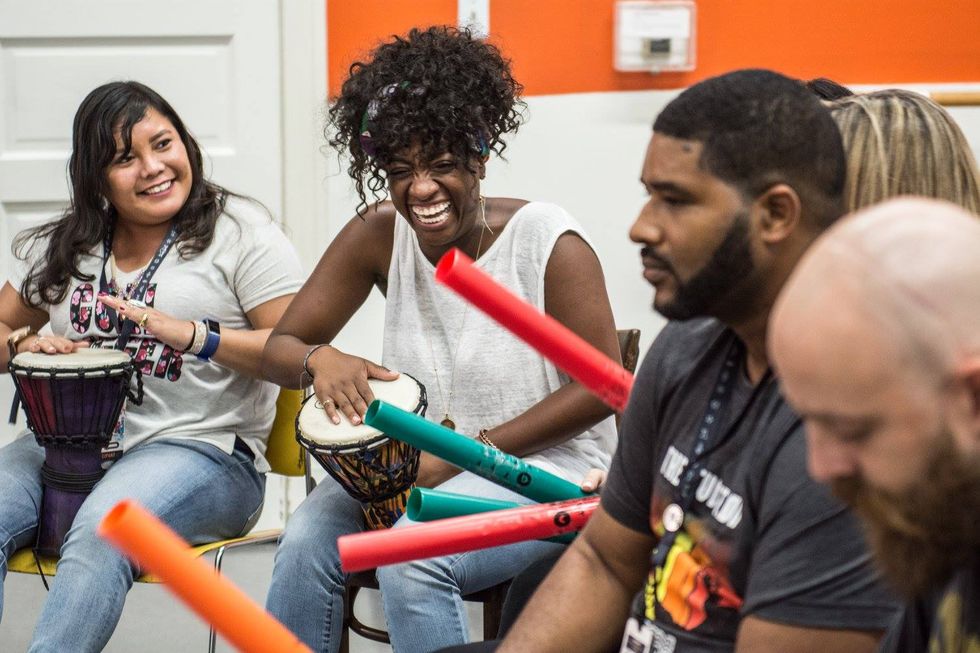 A few weeks ago in Baltimore — right around the time Confederate monuments were taken down — a group of social entrepreneurs and grassroots activists gathered at the Red Bull Amaphiko Academy for a summit dedicated to helping them tackle complex issues, many of which uniquely affect America’s youth. For 10 days, they tried to find ways to disrupt the school-to-prison pipeline, best advocate for marginalized students, and even overcome the hidden roots of systemic racism.

“We were surrounded by people genuinely concerned with humanity’s ability to correct its own trajectory,” says attendee Muhammed Najee-ullah. “I had to let go of my own suspicions and drop my guard to really be able to see and experience the value in front of me. This group’s compassion for society and humanity is the foundation for new systems that will enhance the quality of life for all of us.”

Below, learn a bit more about the efforts of Najee-ullah and a few of his fellow Academy alumni.

Matthew Kincaid doesn’t want to just reduce racism. He wants to replace it.

Kincaid is the founder of Overcoming Racism, a New Orleans-based consultancy that guides schools in developing anti-racist educators and teaches them how to combat systemic racism.

“In that moment, this narrative of the importance of replacing racism with anti-racism in schools connected us all — Americans, South Africans, Austrians, Britons,” Kincaid says. “One of the coaches said, ‘Maybe overcoming racism is just as much about healing as it is about changing outcomes in schools.’ I hadn’t thought about it that way, but perhaps that’s what this country needs, to heal from the ways we’ve allowed race to divide us.”

As a young black man who attended predominantly white schools, Kincaid was acutely aware of what institutionalized racism felt like. He documented some of his experiences in a viral Facebook post that recounted a time when a teacher told him black people were naturally athletic because of slavery. Kincaid attended his first anti-racism workshop at 14 and started to think about how to position difference as an asset instead of something to fear.

“I’ve lived through what it feels like not to have any kind of college readiness education,” Moran says. “Our people, whose true histories are untaught, are often erased from dialogue and the westernized K-12 educational history books. We’re the last to be thought of and the first to have our funding cut.”

Moran and Kincaid agreed on the importance of educating every generation on the true history of their people and equipping them with the knowledge of their ancestors. “Matthew and I both have a similar goal with our organizations, and that’s to uplift people,” Moran says.

Brittni Kellom doesn’t want to coddle survivors — she wants to push them forward.

The founder of Just Speak, Inc. was emotionally and sexually abused by her father. Despite all that she’s endured, which includes choosing to have an abortion after her abuse resulted in a pregnancy, Kellom’s demeanor is warm and open. In 2003, she turned her horrific experience into a trauma-centered advocacy group that provides crisis support and resiliency programming for 5- to 18-year-olds. Just Speak provides a safe space for survivors to share their stories and collaborate in a way that leads to their involvement in the community as advocates.

For Kellom, being at the academy and working with her coach, Gail, reinforced the power of harnessing her personal story to attract the kind of advocates Just Speak needs. “Gail knew all about what I was building, what it could be, and how my personal story as an incest survivor fits in,” Kellom says. “I felt not only understood, but pushed.” That healthy push and pull is something she hopes to emulate with her own survivor group.

In addition to recruiting advocates for Just Speak, Kellom is working on developing a festival for the Detroit area that reframes the conversation around trauma.

[quote position="full" is_quote="true"]Maybe overcoming racism is just as much about healing as it is about changing outcomes in schools.[/quote]

Muhammed Najee-ullah wants young people from all backgrounds to know that science is an option. \n

“On one hand, we’ve got a national deficiency of qualified applicants for STEAM careers, and on the other, young people for whom their unsupervised idle time can have devastating social effects,” Najee-ullah says. “I think we can bridge that gap and rally around our youth and families by providing education and information that also entertains.”