It doesn’t just make the staff’s lives harder but could endanger those with actual allergies. 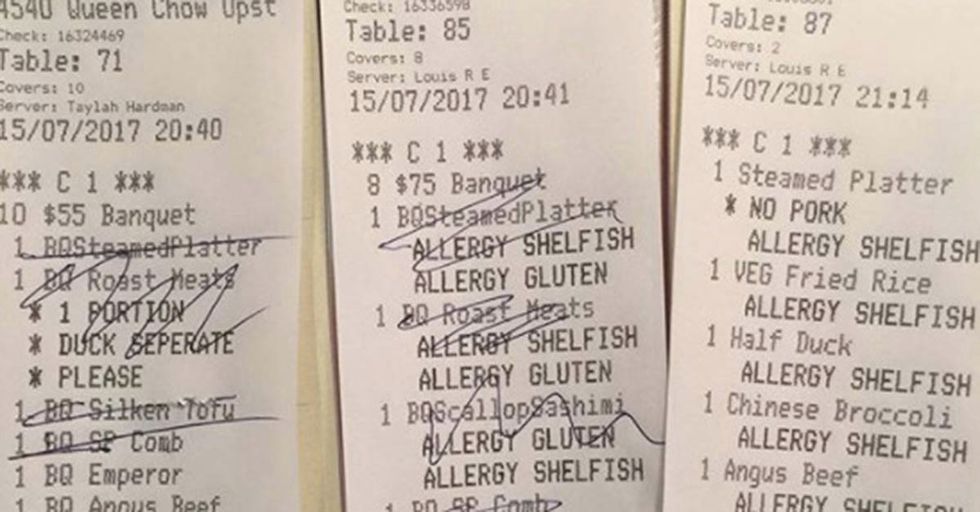 Food allergies are nothing to trifle with, but as Australian chef Patrick Friesen has pointed out in an eye-opening post, those who invent fake allergies as a guise for their pickiness or even to be trendy are creating a bigger problem than they might realize.

This Instagram post by from Friesen speaks volumes. He posted three tickets from different tables, scribbling out the requests of “allergic” diners that are contradictory out of either deceit or ignorance.

You’ll notice that he doesn’t speak to the undue toll these groundless modifications take on his kitchen — which is substantial, especially during peak hours — but instead chooses to focus on how forcing staff to determine “real” and “fake” allergies puts those with real allergies at risk.

Chefs were quick to say “Amen!” in the comments, discussing the hardships, especially in the wake of new laws governing food service, these phony requests make.

The big takeaway, beyond the impact on the kitchen workers, is kitchens treat allergies and preferences differently. If one dines at a five-star restaurant or hotel, the server will often ask after a special request, “Is this a preference or an allergy?”

That question serves to let the kitchen staff know just how much effort they should put into preparing a certain dish. Should they use a clean chopping block? Should they wash their hands after touching other items? These are the things that go on behind the scenes when diners claim they have an allergy.

Speaking to the Daily Telegraph, Friesen summed up the problem with an example, stating, “You have these people who come in on a first date and they say ‘I’m allergic to onions’ because they just don’t want to have onion breath.”

If you’re a diner who conflates an allergy with a preference, for any reason, just knock it off. Some people you don’t see are treating that request like a life-or-death situation.