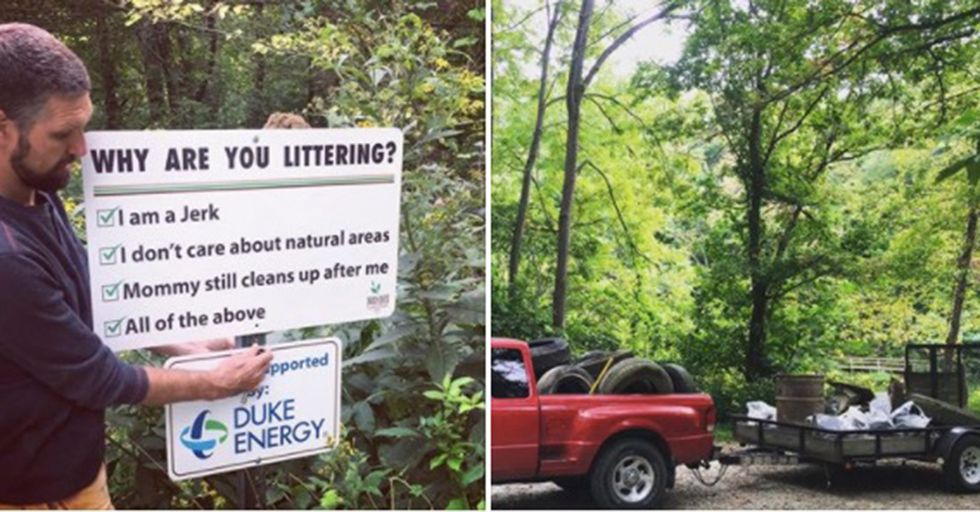 If someone has enough disregard for public land and beauty that they’re considering littering, there’s a good chance that a stark “NO LITTERING” sign will do little to dissuade them.

Fed up with seeing litter scattered across their neighborhood, the nonprofit NICHES Land Trust in Lafayette, Indiana, decided to employ another tactic to keep litter off their land. It used shame. Not the public shaming of litterers after the fact, but rather shaming a person before they litter by making them face the reasoning (or lack thereof) for their actions. The group has recently shared its tongue-in-cheek yet effective signs on its Facebook page.

According to the group’s website, its mission is “to protect, restore and sustain northern Indiana’s ecosystems by providing habitat for native species and offering natural places for education, appreciation and enjoyment of current and future generations.”

While the responses are clearly meant to be funny, the signs convey the truth that there’s no good or valid reason to litter. Reminding people of this fact in a new fashion just may get them to think twice about tossing their trash on the ground.

Nyssa Lilovich, communications director for NICHES, told A Plus that the signs are being leveraged in an unintended fashion that may work toward the same end as the intended one. “What we have really noticed on social media is that individuals are sharing the post and calling out people they know to tell them they should not be littering,” she said.

Overall, the response has been overwhelmingly positive, aside from criticisms surrounding the environmental practices of Duke Energy, which sponsors the signs.

While the efficacy of the signs in terms of litter reduction has yet to be surveyed, it’s clear that the sentiment and ingenuity behind them have garnered the NICHES Land Trust some well-earned attention in their fight to keep their backyard clean.