With these three tweets, he let trans soldiers know they’re both appreciated and welcome. 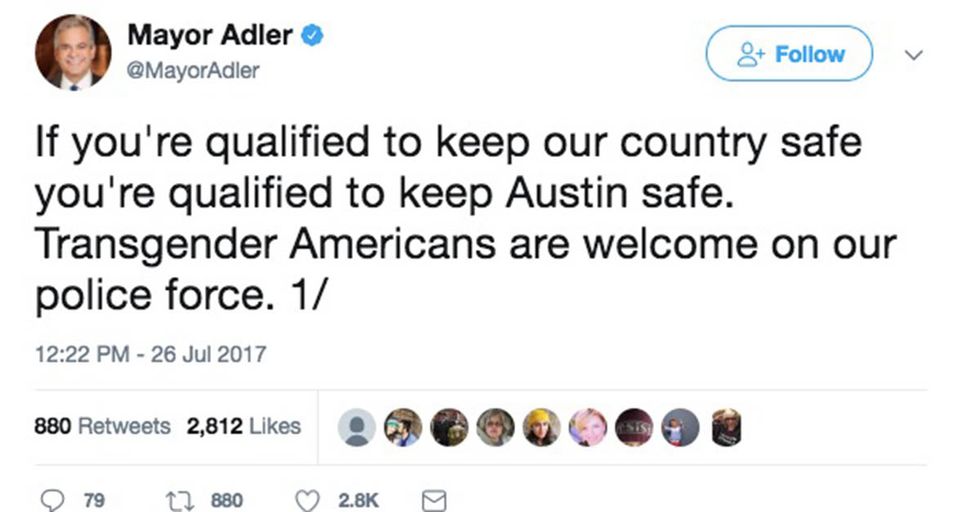 On Wednesday morning, Donald Trump, in just three tweets, managed to belittle the transgender community and weaken our armed forces by banning trans people from serving in the U.S. military “in any capacity.” The devastating and capricious change in military policy, the legality of which is very much in doubt, left many selfless and brave soldiers suddenly uncertain of their employment status.

Less than seven hours later—also in three tweets—Austin Mayor Steve Adler let those ostracized and betrayed by their president know that their service was valued and that a place for them existed on his city’s police force.

Austin is the safest big city in Texas partly because we know our differences make us a stronger community. 2/
— Mayor Adler (@Mayor Adler)1501096990.0

Two hours after Adler’s appeal, Houston Police Chief Art Acevedo extended a similar offer to enlisted individuals, trans or otherwise, informing them that they’re welcome to continue their service in his department.

These heartening responses from Austin and Houston were shared so decisively and immediately that their effect on staffing will not be known for some time. However, their effect on those marginalized by a senseless whim is palpable. They have not only appealed directly to the trans men and women who serve valiantly but also have inspired thousands of others to echo the sentiments in support of all soldiers.

In all likelihood, Trump’s ban on trans soldiers will not hold up. But regardless of the aftermath, many have set aside politics and pandering to speak up for what is right and ensure the selfless individuals affected may continue to serve as they wish.