10 Years Ago, Some Famous Experts And Execs Were Certain The First iPhone Would Fail

Time has not been kind to iPhone critics. 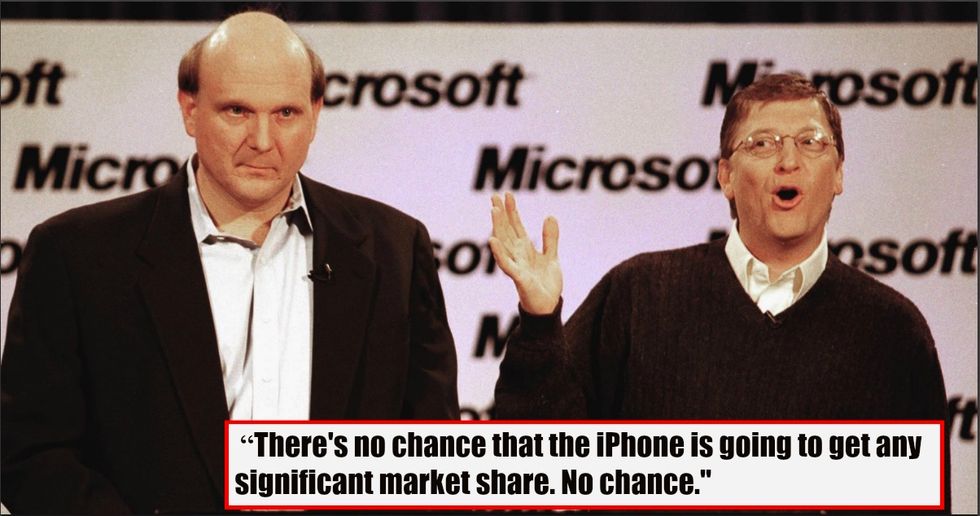 When the first iPhone debuted to much fanfare and excitement on June 29, 2007, there was nothing like it on the market. Expectations were high, but Apple didn’t really become the juggernaut it is today until it broke into the phone business.

So amid the anticipation of the first iPhone’s debut, there were many esteemed and prominent voices who claimed the iPhone wouldn’t just fail — but would fail miserably.

Of course, the iPhone is arguably the most popular, influential, and thus, “important” consumer electronics product in human history, but it’s still worth our time to revisit some of the loud objections many had to the idea of an Apple phone. The errant predictions don’t just serve as benchmarks of the tech world in 2007, but they also happen to be very fun to mock for just how wildly misguided they were.

Here are just a smattering of the guilty naysayers who will, as long as the iPhone exists, continue to rue their words.

#1. Let’s start with a clearly biased voice: former Microsoft CEO Steve Ballmer, who famously said to USA Today, “There's no chance that the iPhone is going to get any significant market share. No chance. It's a $500 subsidized item.”

#2. Another non-neutral party, Jim Balsillie, the CEO of RIM (Blackberry) at the time, predicted, “It’s kind of one more entrant into an already very busy space with lots of choice for consumers. But in terms of a sort of a sea-change for BlackBerry, I would think that’s overstating it.”

In hindsight, calling the iPhone a “disruption” for Blackberry was actually very much an understatement.

#4. Tech Crunch, presumably a publication that knows about these sorts of things, offered a simple take that is fun to read thanks to writer Seth Porges’ brevity. “We predict the iPhone will bomb,” he said. Oops.

#5. Another exec with a stake in Apple’s failure, Palm’s then-CEO Ed Colligan claimed that Apple just didn’t know how to make a quality product like Palm did and that would be their ultimate downfall. He sounds so sure of his opinion of Apple and confident in his own company when he said, “We've learned and struggled for a few years here figuring out how to make a decent phone. PC guys are not going to just figure this out. They’re not going to just walk in.”

A decade later, the iPhone continues to steamroll its competition, but its detractors still predict that each subsequent version is the beginning of the end of the device’s reign. It hasn’t happened yet, but even if you feel the device’s downfall is just around the corner, these legendary doubters might convince you to keep your prediction off the record.