The woman was cited, but the policeman took extra measures to help her. 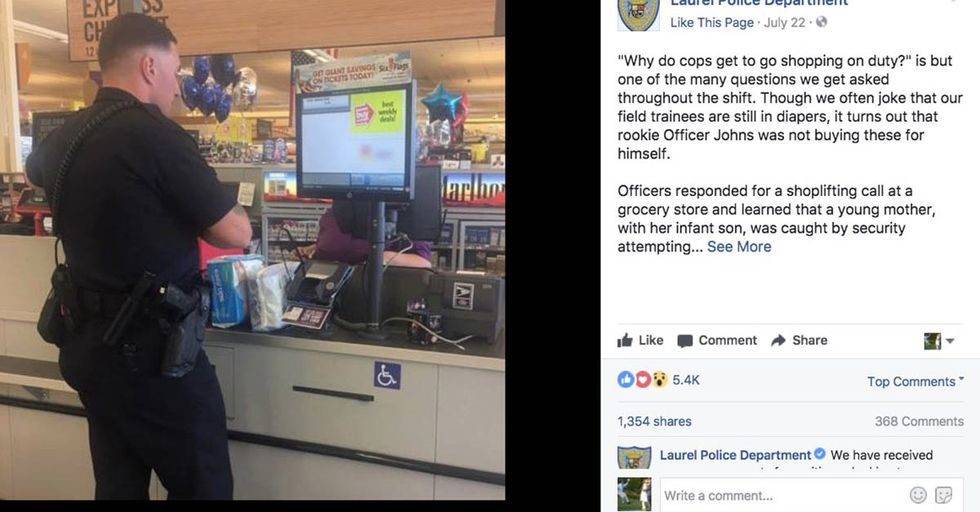 Police have very little latitude in how they enforce the law, but that doesn’t prevent them from empathizing or even helping as fellow human beings. Recently, the Laurel (Maryland) Police Department took to Facebook to share a photo and a simple question.

“Why do cops get to go shopping on duty?” the post asked.

The question spoke to the scenario captured on camera in the photo above.

Officer Johns was called to the store after a woman was found trying to shoplift. The woman explained that she attempted to steal diapers for her 2-year-old son when she didn’t have enough money to buy them after buying her groceries.

She was cited for shoplifting, but Officer Johns wanted to ensure — shoplifter or not — that this mother had diapers for her child. So he went out-of-pocket to buy the diapers for her. He did his job by issuing the citation but also helped a woman and child clearly in need. The police department proudly touted his actions on social media, praising him for "not just fairly enforcing the law, but also showing empathy to an innocent child put in a difficult situation."

According to a CNN report, a spokesperson for the department conveyed that Officer Johns was raised by a single mother and understood the struggle the shoplifting mom endured.

In the wake of many indictments of law enforcement officers “just doing their job,” many praised Johns for his ability to balance his duties and his humanity. In the comments of the post, the police department responded to many strangers’ requests to donate money, referring them to a local advocacy group that provides for struggling families.