After A ‘Malicious’ Segment, The New York Times Wants A Public Apology From Fox News

Fox News responded the same way a scolded toddler would. 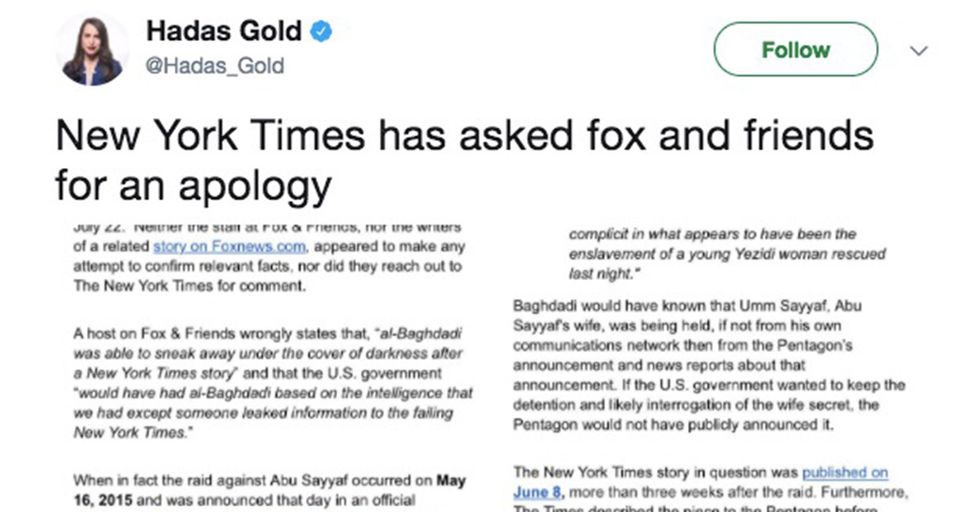 It’s no secret that The New York Times occupies a very different place on the media spectrum than Fox News, but after a recent “Fox & Friends” segment, the newspaper isn’t willing to chalk up serious allegations to a simple difference of opinion — it’s calling the implications “malicious and inaccurate” and demanding an apology.

The conservative news program recently aired a segment that implied The New York Times’ report of leaked information allowed ISIS leader Abu Bakr al-Baghdadi to “sneak away under cover of darkness” upon learning that the U.S. military was “close” to him. The show’s discussion centered on a recent Fox News piece quoting Gen. Tony Thomas that news of the military’s proximity was “leaked in a prominent national newspaper,” alerting al-Baghdadi.

The New York Times addressed the issue in question in the same statement that calls for an apology.

Fox News offered a curiously worded statement regarding the Times’ request for an apology that seemed to skirt the outlets’ corrections and focus on a “hyperventilating” New York Times.

The nature of Fox News’ response didn’t escape the attention of many, including CNN Money, which offered up this tweet on the media company’s reluctance to own up to a mistake.

Others are simply suggesting that Fox News should offer daily apologies for their treatment of journalism in furthering a right-wing narrative. It’s a long shot, but still something worth pursuing.