Is he just messing with them? 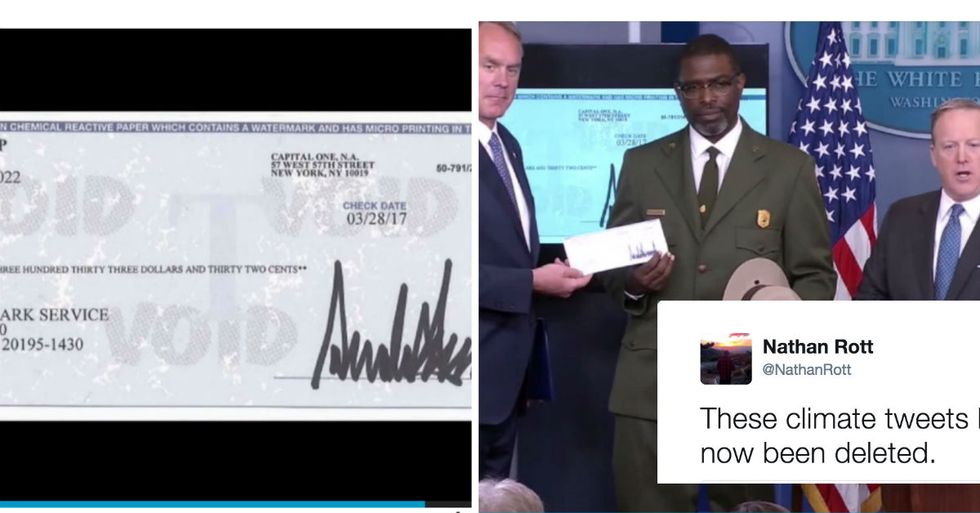 President Trump and The National Park Service have a tense relationship, to put it mildly. So, it’s all the more surprising that Trump just made a public display of donating his first presidential paycheck—with an oversized fake check to boot—to that very agency.

After all, it was an anonymous source at the agency who created the first of the “rogue” Twitter accounts that began posting climate change data after Trump’s White House censored such broadcasts, just days into his administration.

But at Monday’s White House briefing, press secretary Sean Spicer announced that Trump was donating the first three months of his annual salary to the group.

“The president has spoken with counsel and made the decision to donate his first-quarter salary to a government entity,” Spicer told reporters.

And then, in an incredibly awkward and emasculating moment that almost surely was stage managed by the president himself, Spicer handed over a fake, oversized check with Trump’s signature to a very annoyed-looking park service official and to Interior Secretary Ryan Zinke.

But there’s a catch: The $78,333.32 check won’t be going to efforts to combat climate change or other environmental protection efforts. Instead, Zinke said the money will go to preserving “history battle sites,” presumably from the Civil War.

And lest you think Trump has suddenly had a change of heart about the beloved park service, remember that this is a man who seemingly lives to troll his vanquished adversaries. Even his biggest fans are fully aware of the delight Trump takes in publicly humiliating his critics. If you needed a reminder, never forget, Mitt Romney’s dignity (1947-2017):

That would be like if you made the average U.S. salary of around $56,000 and Sean Spicer made you smile and hold up a giant, fake check for $1.46—a little less impressive when you put it that way.​

“If Donald Trump is actually interested in helping our parks, he should stop trying to slash their budgets to historically low levels. This publicity stunt is a sad consolation prize as Trump tries to stifle America’s best idea,” the Sierra Club said in a statement.