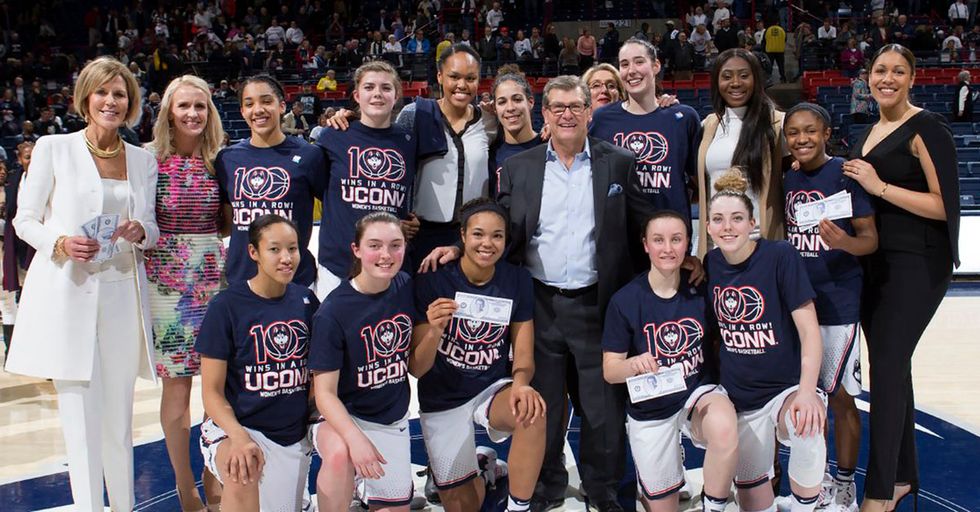 Last night the University of Connecticut women’s basketball team further cemented their place in college basketball history by defeating No. 6 South Carolina 66-55. In doing so, the team recorded its 100th consecutive win, a streak spanning back to November 17, 2014. The 100th win builds on the team’s 91-win record among Division I women’s teams set earlier this season.

The gaudy run nonetheless remains short of the collegiate record 131 consecutive wins that the Wayland Baptist women tallied in a run from 1953-1958. That streak predated the NCAA, and it’s a safe bet that a Wayland Baptist-UConn matchup today would favor the Huskies immensely. No doubt, the Huskies will continue their campaign to eliminate any asterisk, “but,” or other qualification from their dominance and place in college basketball history.

Here are the highlights from yesterday’s historic game:

The Huskies, under coach Geno Auriemma, remain on the greatest winning streak in modern sports. They’re one of only four teams in the history of the NCAA—all sports, men’s and women’s—to reach 100 consecutive wins, and are eyeing their fifth straight national championship, which is considered by some to be “inevitable.” To give a sense of context, not only had the Huskies won their previous 99 games, but they had done so by an average margin of victory of 38.7 points. As of August 2015, the average total score posted among all Division I women’s teams was 61 points.

UConn faces one more ranked opponent, No. 22 South Florida, before heading to the conference and, presumably, NCAA tourneys.

But for now, they might want to spend a day basking in the glory of 100 games without a loss.