"It makes it so much harder than it needs to be.” 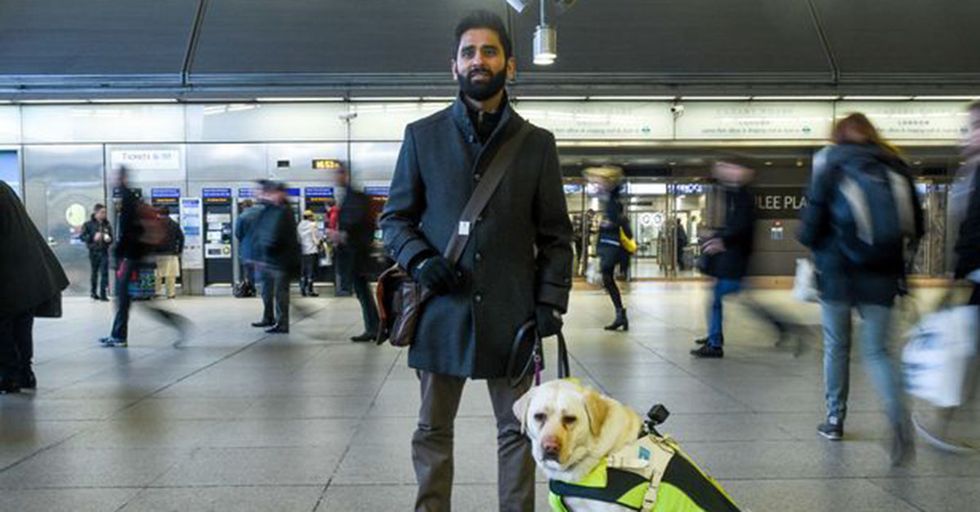 The notion of people lobbing abuse and harm onto a blind man and his guide dog sounds too cruel to be real, but as this video below shows, it’s very real and disturbingly common. 37-year-old Amit Patel has been legally blind due to Keratoconus since 2102. The former (due to his condition) doctor and his wife live in London, where he negotiates the city with the assistance of a guide dog named Kika.

To show (and prove to) the world that he faces abuse the likes of which most decent people wouldn’t dream of, he strapped a GoPro camera onto Kika as he went about his daily business in London. Here’s the footage from one video:

As you might imagine, it’s not usually outward animus or antagonism directed at Patel and Kika, but the manifestation of impatience or the lack of realization that the insults and shoving are being levied against a blind man and his guide dog. Of course, that’s of little consolation to a man who can’t cross an intersection or ride an escalator without people pushing, cursing, or stepping over his dog.

Adding insult to injury, after these run-ins, the offending parties will go so far as to demand apologies from Patel, as he conveys here:

"Kika always sits to my left hand side so we often block the escalator and people will hit her with bags and umbrellas to get her to move out of the way. The worst part is the tutting and negative comments behind me. People are so rude and arrogant and assume they can do whatever they want. One lady even said I should apologise to the people behind her for holding them up. I asked her if I should apologise for being blind and she said 'yes'.”

He said that while he has learned to whether the hardships, Kika carries the scars a little longer, often refusing to ride an escalator or the tube for several days after an incident. That said, Kika continues to perform her job, once even saving Amit’s life by putting herself between her owner and a car speeding through an intersection. He recalls, "She saw the car and she got in front of me and took the hit - the car grazed her nose. It was three days before she could work again.”

It’s unlikely that this video will affect much change for Amit on the streets of London, but it may serve to inform the few who see it that being a blind person managing a service animal in a crowded city is hard enough without taking on a barrage of confrontations, passive and otherwise, from those around them.