Apparently, no one needs to give their permission for this to take place. 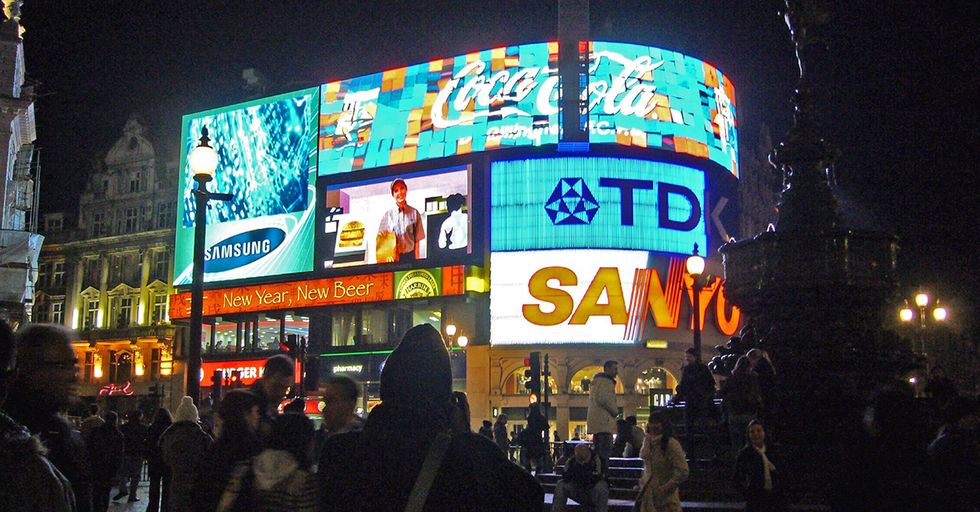 London’s Piccadilly Circus has long been home to garish commercial signage that leaves tourists staring, but at the end of the month, the signs themselves will be staring back. A new video display called Picadilly Lights is 8,500 square feet in size and will detect the ages and even the emotions of nearby pedestrians to display more targeted and, hence, valuable advertisements to its passing audience.

The project is the work of Landsec, a U.K. commercial property manager, which seems nothing but proud of this Orwellian advertising concept. “Screen content can be influenced by the characteristics of the crowd around it, such as gender, age group, and even emotions,” says the company’s website. “It is also able to respond and deliver bespoke ad content triggered by surroundings in the area.”

The technology has been given the curious name “social listening” to belie the reality that companies are now surveilling people in public spaces to boost their bottom line. Similarly coy is a video touting the new installation, which gives no mention of the fact that those ambling by the site of the digital displays are being watched, monitored, and monetized.

A Landsec rep, speaking to The Verge, insisted that the installation won’t archive the personal data collected, which seems like a strange line to draw considering the data is being used in real-time to change the message. Perhaps even Landsec found the amassing of data for sale to be too unpalatable for its PR purposes.

Much as the cameras and computers will track people’s faces and emotions to broadcast ads, they will also monitor the auto traffic in the area, tailoring messages to the type of cars that happen to be driving by at any given moment. The Landsec installation will also provide complimentary Wi-Fi for those in the area, though whatever strings will ultimately be attached to that proposition are being kept quiet at the moment.

Beyond the unnerving principles underlying this business model, the display screens are impressive from a technological standpoint, the largest of their kind offering 281 trillion colors over an area roughly equal to almost four tennis courts. Of course, that’s not the big takeaway among those concerned with privacy issues, as few are inclined to praise the very thing that’s staring at them without their consent.

Later this month, when the installation is activated, Coca-Cola, Samsung, L’Oreal, and Hyundai will all be renting space on the board.