The Unified Korean Women’s Hockey Team On Its Historic Moment

“Both South Korean and North Korean athletes thought the same thing: We wanted to do the best in the game.” 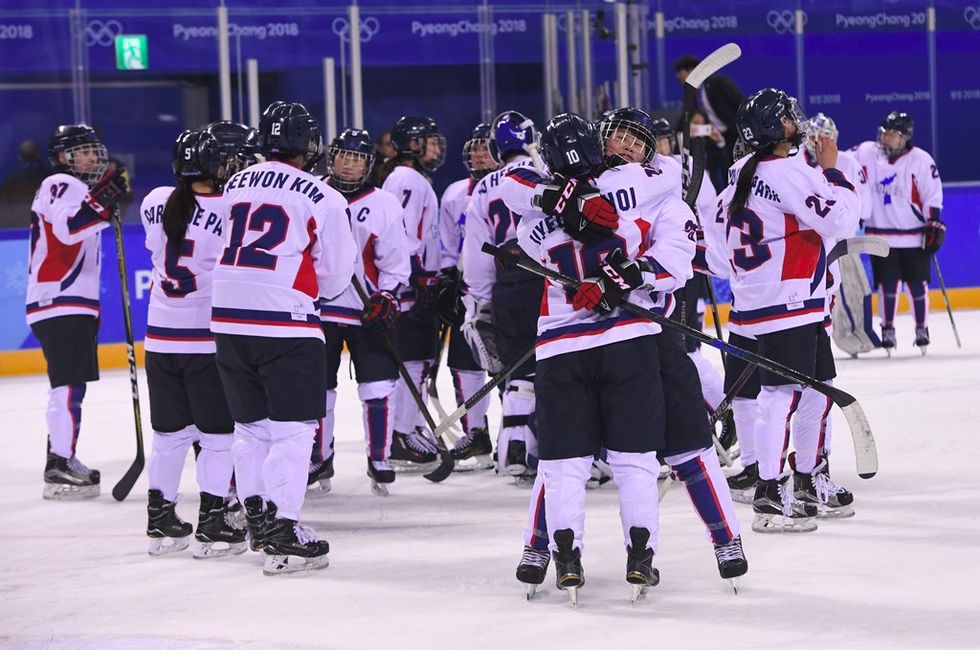 When fans, athletes, and media on the ground at the Pyeongchang Winter Olympics start talking about what the historic legacy of these games might be, there’s one hope that gets passed around — maybe the 2018 Winter Games will go down in history as the “Peace Games.”

Peace has certainly been a long-stated goal of organizers who wanted to host the Olympics in South Korea in part to help unify the fractured Korean peninsula. Just maybe, it’s working. For a while, at least in sport, it has. For the first time at the highest level of international sport, the Koreans have played not against each other, but on the same team. They’ve united as one: the unified women’s hockey team.

“I think both South Korean and North Korean athletes thought the same thing: We wanted to do the best in the game,” says North Korean forward Jung Su Yuon after the team’s first game together. “We also had one heart and one mind to compete in the games and to show the best performance.”

The agreement between the two Koreas means that 12 North Korean women have joined the South Korean team to compete together. Three North Koreans must be on the ice at all times.

The team is not competitive. They lost their first two games 8-0, first to Switzerland and then to Sweden. Their third game, against national rivals Japan, they lost 4-1.

Despite losses on the ice, fans keep flocking to the games waving Korean unification flags — as well as Korean flags — and even participating in a version of the wave started by the North Korean cheerleaders.

South Korean forward Park Jongah described that Olympic opener as “the game anticipated by everyone in Korea.”

“I never competed in front of so many people before so I felt nervous,” says Jongah. “And I also felt nervous that other teammates would feel nervous.”

[quote position="full" is_quote="true"]I think both South Korean and North Korean athletes thought the same thing: We wanted to do the best in the game.[/quote]

The display of unity was met with trepidation by some fans in attendance.

As the Koreans were clearly overpowered by their opponents, critics wondered if the South Koreans might have been more competitive without their North Korean counterparts. The South Koreans had been practicing together for years, participating in exhibition games against top U.S. college teams and consistently performing better in world championships together since 2011. The North Koreans had fewer opportunities to prepare and the unified team only began skating together at the end of January — just weeks before their first game together.

Then there are the political worries of what such cooperation with the North means.

“I welcome this,” says fan Lee Dae-kyung, 60, “but I’m a little bit worried about what comes next.” He expressed a sentiment common in South Korea — that the North Korean power-holders will never give up their attempts to overcome South Korea.

“I’m not good at politics,” says Dae-kyung, “but I hope we want to keep this Korean peninsula in peace.”

Speaking to reporters during the games, South Korean president Jae-in Moon shared the same sentiments. “There have been many achievements in advancing inter-Korean talks,” said President Moon, “and I hope this will lead to an improvement in inter-Korean relations.”

He also added that he saw the games as a chance for global unity.

“We also marched together at the opening ceremony, cheered together, and there were many cultural performances by the North Koreans,” President Moon said, adding, “I believe that this has been very moving, not only for Koreans but also for the whole world.”