Daughter explains brutal obituary she wrote for her father about his ‘bad parenting.’

The obituary walks a fine line between uncloaked honesty and mean-spiritedness. 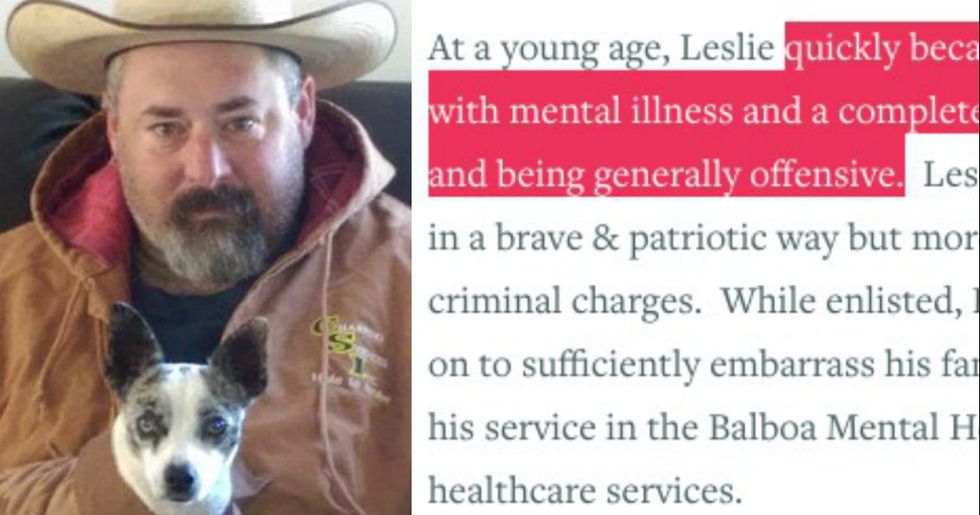 This article originally appeared on 05.22.19

Everyone is entitled to a few nice words at their funeral, as the adage goes. Normally, this is a non-issue. Flaws can be ignored or overlooked for the sake of harmony and a peaceful, optimistic send-off.

But what if the flaws created too much damage and heartache to go without saying?

Sheila Smith made headlines last week with an obituary that was as honest in what can only be described as a brutal sense. Brutal for the departed, her father Leslie Ray Charping, and brutal for the family that had to endure his life and death.

Here's the obituary in its entirety, taken from the website of Carnes Funeral Home:

Leslie Ray "Popeye" Charping was born in Galveston, Texas on November 20, 1942 and passed away January 30, 2017, which was 29 years longer than expected and much longer than he deserved. Leslie battled with cancer in his latter years and lost his battle, ultimately due to being the horses ass he was known for. He leaves behind 2 relieved children; a son Leslie Roy Charping and daughter, Shiela Smith along with six grandchildren and countless other victims including an ex wife, relatives, friends, neighbors, doctors, nurses and random strangers.
At a young age, Leslie quickly became a model example of bad parenting combined with mental illness and a complete commitment to drinking, drugs, womanizing and being generally offensive. Leslie enlisted to serve in the Navy, but not so much in a brave & patriotic way but more as part of a plea deal to escape sentencing on criminal charges. While enlisted, Leslie was the Navy boxing champion and went on to sufficiently embarrass his family and country by spending the remainder of his service in the Balboa Mental Health Hospital receiving much needed mental healthcare services.
Leslie was surprisingly intelligent, however he lacked ambition and motivation to do anything more than being reckless, wasteful, squandering the family savings and fantasizing about get rich quick schemes. Leslie's hobbies included being abusive to his family, expediting trips to heaven for the beloved family pets and fishing, which he was less skilled with than the previously mentioned. Leslie's life served no other obvious purpose, he did not contribute to society or serve his community and he possessed no redeeming qualities besides quick whited sarcasm which was amusing during his sober days.
With Leslie's passing he will be missed only for what he never did; being a loving husband, father and good friend. No services will be held, there will be no prayers for eternal peace and no apologizes to the family he tortured. Leslie's remains will be cremated and kept in the barn until "Ray", the family donkey's wood shavings run out. Leslie's passing proves that evil does in fact die and hopefully marks a time of healing and safety for all.

The obituary walks a fine line between uncloaked honesty and mean-spiritedness, repeatedly falling on either side. If this obituary is to be believed (no person or account has publicly questioned or denounced this characterization), his family has a right to be both angry for his life and happy for his death. However, the controversy surrounding this obituary isn't the survivors' feelings, but their expression of them.

Sheila, speaking to The Michael Berry Show, a radio program, stood by the obituary she wrote, claiming it was an effort to heal, forget, and minimize the residual impact his death would have on their lives. To realize this, and to fulfill her late father's wishes, the obituary needed to be honest. She said to the show's host, “ A week after he passed I sat down and began working on it. I was somewhat blocked and everything I was going to write was going to be a lie," she said. “He hated a liar and he would appreciate this."

\nSpeaking earlier to KTRK, Sheila said that those who are bothered by this or the notion of speaking ill of the dead, are fortunate to not understand. “I am happy for those that simply do not understand, this means you had good parent(s) -- please treasure what you have."
She continued to say that whitewashing transgressions that are so endemic and undiscussed in the world, such as her father's issues with domestic violence and alcoholism, serves no greater good.
She concluded, “I apologize to anyone that my father hurt and I felt it would have been offensive to portray him as anything other than who he was," she also said. "This obituary was intended to help bring closure because not talking about domestic violence doesn't make it go away!"