Despite international sanctions and visa restrictions, a Tehrani man is striving to start a local surf industry. 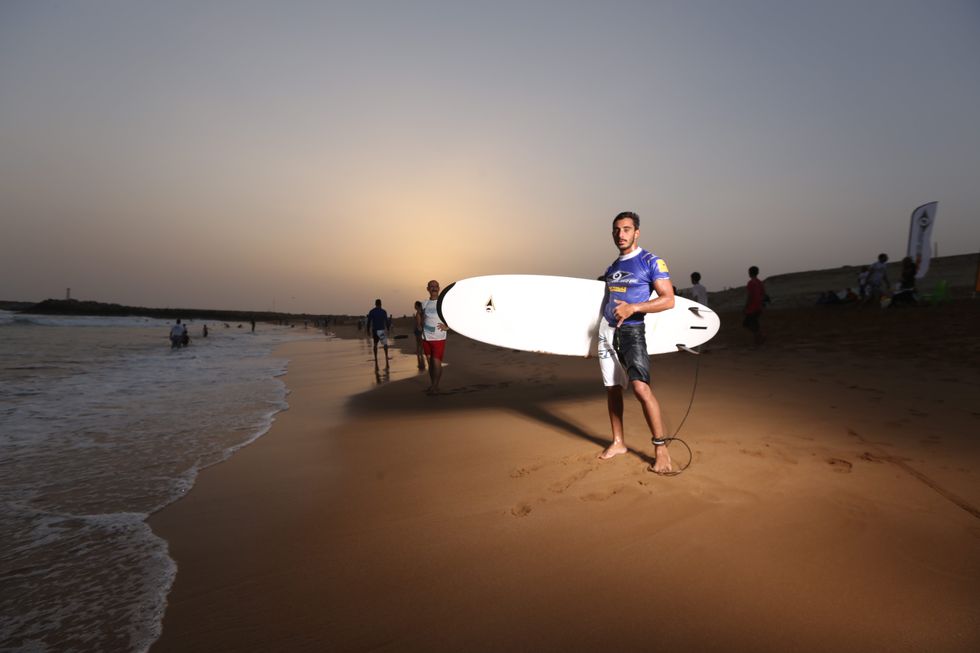 Surfing can inspire a sense of community while helping people experience and appreciate the environment.

It’s a beautiful summer afternoon at the beach, with a light breeze and sunlight shimmering across the sand. Out in the water, a scrum of people flits and floats on surfboards together. They’re splashing, paddling, and shouting with laughter. Men, women, and children all drift in a small flotilla, waiting for the next wave.

Except for a few details — endless sand dunes, a few palm trees, and fishing boats in the background — this afternoon’s beachy scene could be anywhere from Malibu to Mexico. But in fact, this tiny beachside spot is far from the reaches of most Westerners’ vacation plans.

This is Ramin, a village in the southeast corner of Iran that’s perched on the Gulf of Oman and less than an hour by car from the border of Pakistan. Situated in the Sistan-Baluchistan province, the region has been called one of the most dangerous in the world. This is a place where tradition still rules. It’s a region that is worlds apart not only from the West but from Tehran and its cosmopolitan environs 1,800 kilometers (around 19 hours by car) to the north.

Wakeboarders pose for a picture at sunset after their first surfing experience in Ramin, Iran. Photo by Shahab Nouri, courtesy of Farid Gorgin.

None of that matters to Farid Gorgin, a 28-year-old from Tehran who first learned to surf here four years ago. A professional wakeboarder with his own marketing and clothing design company, he struggled to pick up surfing at first.

“Waves hit you, and you [wonder if] you should go against them or come back to the beach ruined,” he says of his inaugural surf session.

But still, there was something about it he couldn’t resist.

A young surfer learns to catch a wave at Ramin Beach. Photo courtesy of Farid Gorgin.

After Gorgin took a number of trips in following summers, Ramin won him over. “The atmosphere there, it’s indescribable,” he recalls. “I felt like it was my second home, and the local people are my second family. They are laughing all the time, even if they don't know you. They are really hospitable.”

And it’s not just Tehranis and visitors from nearby Chabahar — a bustling port city — who have made Ramin a budding surf destination. “In surfing season, from May to September, you will see local surfers riding the waves or chilling at the beach,” Gorgin says.

Yet, less than a decade ago, few people in Ramin — much less the rest of Iran — knew they could ride waves on their home turf.

In late 2010, that all changed when Irish pro surfer and professor Easkey Britton arrived in Ramin with a couple of surfboards, a few other women, and a camera. They taught an impromptu surf workshop for the Raminis and shared the clips online. Those glimpses of what was possible in a place that’s rather opaque — even to those who live in Iran — inspired a wave of interest, so to speak, in both Ramin and the sport. The women returned a year later to host more formal workshops and shared the experience in the 2014 documentary “Into the Sea.”

Britton, who is widely referred to among Iranian surf enthusiasts as the “Mother of Surf,” came to Iran out of curiosity. She discovered that surfing could be a tool to unite cultures, to introduce opportunity and connection for this isolated community. The sport became a kind of conduit for cross-cultural and cross-economic pollination as surrounding-area locals and Europeans began making the pilgrimage to try to ride Ramini waves.

Gorgin was one of those city dwellers who went there for the first time after seeing video clips of Britton’s classes. “I was really surprised that it is possible to surf in my country,” he says. “[Surfing] was my second biggest dream in my life since I was a child — the freedom and the feeling of just flowing with the beauty of nature and waves.”

And he’s not alone.

In Gorgin’s first year at a surf workshop in Ramin, he says, there were around 12 participants. Last summer’s workshop had 67 people, he says. And as the number of people wanting to discover Ramin for themselves began to swell, so did the number of people with more than communing with nature on the mind. Competing interests have begun to increase as well as some tensions as well.

After Britton’s first workshop, the government launched the Iranian Surfing Association, which brokered at least one deal with BIC Sport to donate boards and a beach hut for storage. While BIC has since parted ways with the association, a coalition of Iranian surf-lovers are taking a grassroots approach to overcoming the social and political barriers to developing surfing in their country. So far, sanctions, visa hurdles, and lack of an existing industry are just a few of the obstacles they are striving to clear.

In the meantime, Abed Fuladi, Ramin’s unofficial surf ambassador and host extraordinaire, dreams of building a small surf hostel on his property. And yet, as one recent traveler said, the idea of asking for money in exchange for the boards is practically anathema in Ramin. Sharing is paramount in the town, so capitalizing on surf tourism may be a tough cultural concept to master.

And indeed, there is an innocence to the village’s emerging surf culture that is long gone from well-trodden wave-riding hubs like Hawaii and Australia. Ramin is a place where people share waves happily instead of enforcing a strict code of surf etiquette that exists elsewhere. Priorities in Iran are different than other surf-worshiping locales. Here, taking time for breakfast and tea is more important than getting to the waves before the wind stirs up. In this way, Ramin is a kind of ground zero for the paradise lost upon which colonial motifs — and modern surf fantasies — have been built.

The newly converted, however, mostly prefer to focus on the promise that surfing carries. “It's a new, growing sport in Iran, and it takes time to get its roots,” Gorgin says. “Also, it needs a lot of support [by financial and tourism].” But most of all, Gorgin says, it needs “unity in choosing the right path to develop it.”

In time, the stars — and tides — might just align.