The risk this store owner took has paid off more than anyone could have imagined. 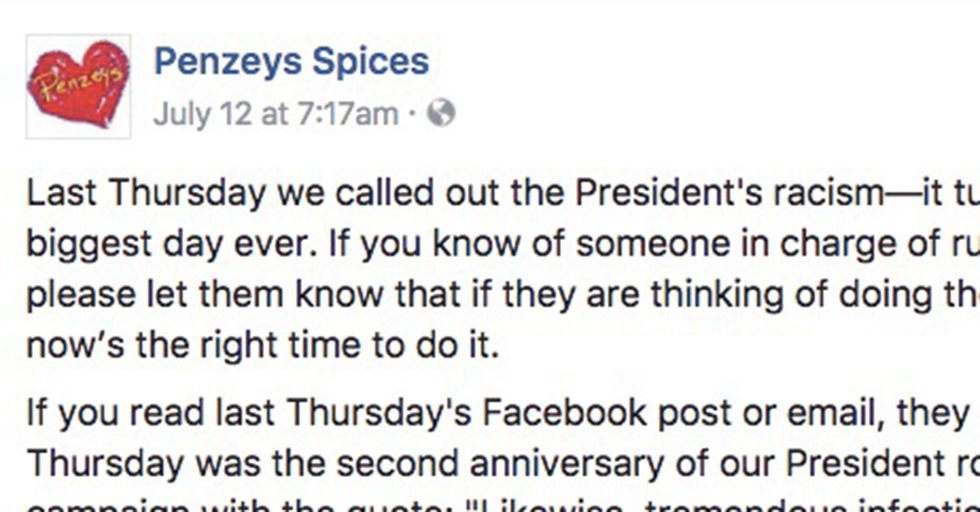 Last week, Penzeys Spices, a small spice business based near Milwaukee, took President Donald Trump to task on the two-year anniversary of his groundless assertion that “tremendous infectious disease is pouring across the border” to bolster increased border security. Little did he know that it would create a windfall of revenue and notoriety to his business.

In a lengthy Facebook post, Bill Penzey, the CEO of the company, used the occasion to offer the store’s Mexican vanilla extract for free to all customers for one day only. In the online statement, he not only explained the rationale for the offer, but offered a sincere apology to Mexican and Latin American individuals who have been hurt or inconvenienced or have felt otherwise marginalized by the policies and climate of the current administration.

The comments, while certainly polarizing, endeared the man and his spice shop to millions who feel the same way about the current state of our union. A week later, he’s facing a problem — his comments created such a whirlwind of attention and business that he’s inundated with orders. According to the post below, the shop sold more goods on the following day than they had in the previous 17 days in July of the previous year.

Business continues to boom for Penzey’s spice store in the wake of the steadfast rejection of Trump’s policies and guiding philosophies. To celebrate the stratospheric spike in business, the company is now trying, as best as possible, to offer more free products to the customers who mention this Facebook ad either online or in the family’s store.

The amazing upturn in the wake of the initial post can be found in this eloquent and gracious follow-up:

Penzeys Spices is hardly a corporate juggernaut, but the company's founder took a stand based on his principles. The risk unquestionably paid off for him, even if that was not the guiding purpose behind the statement. Hopefully more business owners, seeing the profound effect this act had, will be quicker to speak up with their own beliefs.

Speaking against Trump is by no means a get-rich-quick scheme, but the windfall of new business shows that people are willing to stand with those who use their platforms to address injustice, which is a wonderful encapsulation of the best aspects of capitalism and freedom of speech.