Meanwhile, the Department of Justice tries to dismantle LGBTQ protections in the workplace. 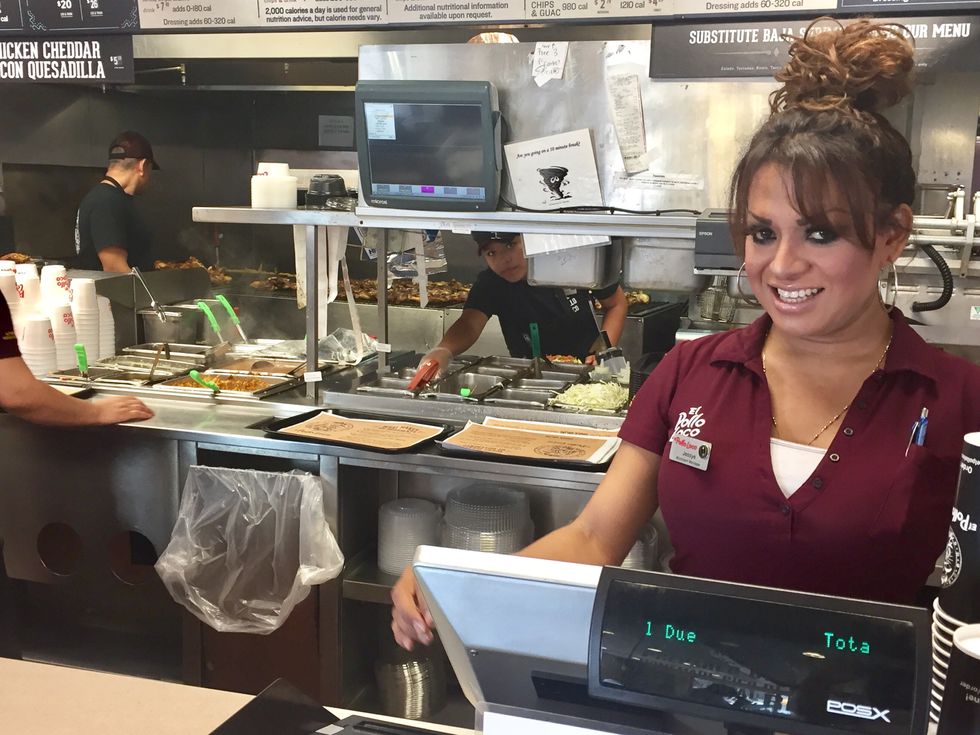 When Jessye Zambrano was 18, she was a star employee at a large fast-food chain — she prefers not to name which one — and was even named “Outstanding Manager” three years in a row. Then she began her gender transition; not long after, she says she was demoted from her position as general manager.

Now 28, Zambrano stayed at that job for 13 years, even though she experienced a great deal of workplace discrimination and a violent altercation with a customer. Partially, she felt she had to stay because she’s the sole provider for her parents, who still live in Mexico. Born in Mexico City, Zambrano came to the U.S. as a teenager; at the time, she was undocumented. But in spring 2016, Zambrano met Michaela Mendelsohn, and things started to look up.

Mendelsohn, 65, is an openly transgender woman and the founder of California Trans Work Project (CTWP), an organization seeking to foster more trans-positive workplaces in California and help transgender women with the launch of one of the largest job programs to help them find work. She is also CEO of Pollo West Corp., one of El Pollo Loco’s largest franchisees, with six L.A.-based restaurants. Under Mendelsohn’s leadership, El Pollo Loco has been committed to hiring transgender people (mostly women of color) in their restaurants.

Today, Zambrano is a manager at one of Mendelsohn’s Pollo Locos, and she says she thanks God for the day the two met. She greets every customer with a smile and walks with the confidence of someone who may be a franchise owner herself some day.

“Working at El Pollo Loco, I have the power to refuse service. A few months ago, a guy came in and he tried to put me down. He said bad words to me and three other trans girls. He was screaming that he didn’t want us to serve him. I felt bad because there were a lot of customers around, but they were supporting us. We told him he couldn’t come back anymore. It gives you the motivation to work harder,” Zambrano says.

On Thursday, October 5, Attorney General Jeff Sessions reversed a policy that protected workers like Zambrano from discrimination on the job, which may have major real-world ramifications, as transgender discrimination is already embedded in many workplaces. According to a report, trans women of color are more likely to be unemployed than their white counterparts, and when they do find work, 90% report experiencing harassment, mistreatment, or discrimination on the job. More than a quarter of trans women reported they had lost a job due to being transgender or gender-nonconforming and 50% were harassed. As a result, 16% said they had been compelled to work in the underground economy — such as doing sex work or selling drugs.

“If gender-nonconforming people don’t find jobs, they’ll always be at risk of falling back into risky behavior because their lives are difficult. This is the true importance of economic justice,” Mendelsohn says.

[quote position="full" is_quote="true"]A few months ago, a guy … was screaming that he didn’t want us to serve him. I felt bad because there were a lot of customers around, but they were supporting us. [/quote]

Mendelsohn hired her first transgender employee, Kristy Ramirez, five years ago. Before working for Mendelsohn, Ramirez was fired from another fast-food restaurant after a female customer confronted her in the women’s bathroom. Today, Ramirez is a manager at an El Pollo Loco in Thousand Oaks. Her story inspired Mendelsohn to give more and more employment opportunities to trans women.

Mendelsohn’s program works with the California Restaurant Association to educate, train, and incentivize members and other business owners to hire trans employees. Those who do, receive a trans-friendly certification, which comes with a state grant covering 60 hours of a new hire’s salary.

These incentives have proven critical to getting more trans people work. But Kylar W. Broadus, a nationally renowned transgender attorney, activist, public speaker, and former professor, says trans employment issues start at the first interview — when transgender women, particularly women of color, show up for their interviews and don’t look like the employer expected them to.

“Employers historically hire people who look like themselves. That’s where the problem comes in. We have to educate and teach employers how to do better,” Broadus says. He adds that public opinion of a business — and the fear that profits can be lost because of who is employed there — sway employers to hire only certain kinds of people.

“It’s the same as when African-Americans showed up for jobs,” Broadus says. “They may have sounded white on the phone, but then they show up, and suddenly, the job is filled. Then you have trans women who are ‘identifiably trans,’ meaning they don’t look like what someone would think a woman is supposed to look like. Lastly, a lot of [employers] fear they’ll be sued if they have to fire this person, so they say, ‘Why even bother?’”

Aydin Olson-Kennedy, the executive director of the Los Angeles Gender Center, echoed this sentiment. We put intense judgment around masculinity and femininity and criticize that, she says, then also criticize poverty and the choices trans women make if they become involved in underground economies. But we do so “without taking any accountability for the system we have set up and created for those folks,” she says.

[quote position="left" is_quote="true"]This is the first time most of them have worked in their authentic gender identity. You can see their life force changing.[/quote]

Mendelsohn says TransCanWork is her chance to use what she does as a longtime CEO and business person to change the landscape of hiring in the U.S. and to encourage those in the restaurant industry to begin accessing the often untapped resources of talented people in the transgender community.

"When I started hiring transgender employees, honestly, I had concerns … and I worried how the other employees and customers were going to respond,” she says. “But we started getting more and more compliments about our trans employees than anyone else on our customer comment line. Most of these women, like Jessye, [had been] working in jobs where they were beaten down and had no voice. They were lost or couldn’t get a job, and their self-esteem was so low. They came in and found a level playing field. I know this is just fast food, but it’s someplace they can start and work their way up in a supportive atmosphere. This is the first time most of them have worked in their authentic gender identity. You can see their whole life force changing.”