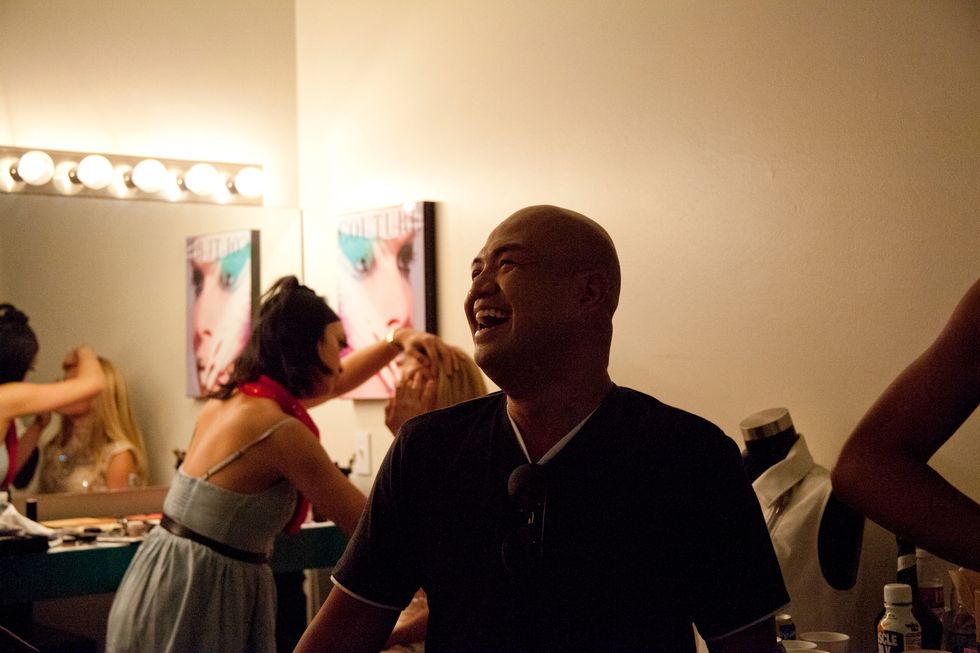 The fashion industry has been at the forefront of eschewing culturally ingrained stigma and challenging binary definitions of gender. Revolutionary fashion house Hood by Air includes transgender models and performers without fetishizing them, with head designer Shayne Oliver’s runway shows and collections lauded for offering up a portrait of the modern world that is anything but homogenous. Highly sought-after model Hari Nef broke ground as the first openly transgender model to be signed to IMG Models, and Andreja Pejic was tapped to front a Make Up For Ever campaign, making her one of the first trans models to book a major beauty deal. Parisian purveyor of cool Kitsuné has collaborated with Reebok on an androgynous line showcasing a host of gender-neutral pieces. And with the West Coast slowly claiming its place among fashion’s elite, it seems only fitting that the first exclusively transgender modeling agency, Slay Model Management, opened its doors this fall in downtown Los Angeles.

Previously an extension of Apple Model Management, one of Bangkok’s leading agencies, Slay Model Management is run by Cecilio Asuncion who multitasks as both owner and director of scouting and development. Fresh off a stint directing a documentary focusing on transgender issues (What’s the T?), which was lauded at over 10 major LGBT film festivals, Asuncion—himself a gay, cisgender Filipino man—was searching for more opportunities to get meaningfully involved with the LGBT community. He had previously connected with representatives at Apple Model Management for What’s the T? and decided to reach out again in hopes there might be synergy on a future project—like helping the agency set up shop in Los Angeles. “I said, ‘I really love what you’re doing, let me go and connect with some people.’ That was it,” he says. “They really loved the vision, and they trusted me.” Asuncion had been hard at work establishing Apple’s West Coast presence, but their timeline didn’t exactly align with what Asuncion had in mind, as he was eager to move more quickly and open shop. They parted ways amicably, and Asuncion soon announced Slay Model Management—the same dream, boasting an all-transgender roster. The filmmaker turned fashion mogul now has six exhilarating months under his belt with the business, with plenty planned for the future.

I meet him on an early fall afternoon at a photo shoot in West Hollywood featuring all eight models on Slay’s roster. He greets me with open arms and gently tempers my immediate barrage of questions by inquiring after my own wellbeing. Despite Asuncion’s light-hearted demeanor and playful sense of humor about the “glass closet” in which he grew up, he is fervently passionate about LGBT rights. Being raised in a family that supported him and his decisions, he says, has allowed him to extend support beyond his own community. He was never forced to play sports or get married, even within a traditional Filipino household where his sister is a doctor and his brother a lawyer. “By child number five, [my parents] were like, ‘Do whatever you want,’ ” he says, laughing. So he moved to the States from the Philippines at 18 and found his creative voice atop a director’s chair with the help of a film cooperative. “I think my advocacy is with my film work and with the agency. That’s where I’m useful,” he says, emphasizing the fact that while he considers himself an ally to the trans community, his activism is decidedly apolitical. “You use what you believe in, with the talent that you have.”

Asuncion explains that the need for a trans-specific agency has many layers, including access to representation that won’t discriminate based on anatomy. “Arice was with Ford Models,” he says of one of Slay’s current signees. “She would [wonder], ‘Why are my girlfriends getting sent out and not me?’ ” Several of Slay’s models experienced similar treatment, noting that their agents didn’t hustle to find them work in comparison to their cisgender clients. There is also the obvious component of transparency—an entirely transgender roster can help eliminate last-minute dismissals, something that one of Slay’s newest models recently experienced just moments before a runway show. “Dominique is changing, and she was pre-[gender reassignment],” says Asuncion. “She got dropped. And that takes its toll on you.” Thus, one of Slay’s most imperative objectives is to provide a community of individuals who understand and support each other in this cis-dominated industry that still considers them outsiders. “I’m kind, I listen,” he says. And it seems that more ears are starting to perk up.

With Raffi Freedman-Gurspan’s recent hiring as outreach and recruitment director for presidential personnel marking the first transgender appointee in the White House and a reality show devoted to Caitlyn Jenner’s life and transition, among other highlights, 2015 has largely been seen as a year of progress for the trans community. The idea of gender fluidity has successfully, and increasingly, found its way into mainstream art, fashion, pop culture, and politics. Laverne Cox stars in Netflix’s Orange Is the New Black. Tangerine, a 2015 film festival frontrunner, stars two trans actors as sex workers navigating Los Angeles, a common reality. Fashion brand & Other Stories’ latest campaign consists solely of transgender talent—including the photographer, stylist, and makeup artist—a move that the star of the campaign, model Hari Nef, explains works to push back against the cis gaze, which treats the trans body as spectacle.

[quote position="full" is_quote="false"]There is also the obvious component of transparency—an entirely transgender roster can help eliminate last-minute dismissals, something that one of Slay’s newest models recently experienced just moments before a runway show.[/quote]

But Asuncion is quick to draw the line between progress and absolute acceptance. “It’s being talked about. It’s too early to assume it’s so much better. After you exhaust that time of talking, then it’s like, how do we make this right?” As it stands today the trans community is still saddled with hardship, and it can be difficult to reconcile this newfound wave of trans visibility and appearance of increased acceptance with the ever-present realities of daily harassment, as well as this year’s rise in trans-related murders. Even with increased presence in mainstream media, trans erasure still rears its ugly head. Two trans-centric films this year feature a cisgender star as the lead—Elle Fanning portrays a transitioning teen seeking his parent’s approval in About Ray, and Eddie Redmayne’s character in The Danish Girl is inspired by trans artist Lili Elbe. Not to mention the controversial Stonewall—based on the infamous Stonewall riots of the late ‘60s, which are credited with kickstarting the modern day LGBT rights movement. The directors chose to center the plot around a fictional white, cisgender gay man, though history widely acknowledges that mainly trans people and people of color were on the front lines of Stonewall.

Closer to home, Asuncion has encountered various struggles in running an agency for a minority within the strict confines of the fashion industry. I ask him about the obvious imbalance of female to male models (Slay’s roster, while continuing to scout, currently boasts 15 female faces yet no men), and he responds as you might expect. Male models are hard to find because those assigned female at birth typically fail to meet industry height standards, which can fall between 5 feet 9 inches and 6 feet 2 inches. “This isn’t a nonprofit thing. It’s a [business]. I didn’t build the fashion industry; I’m abiding by it. Trust me, I’m 5 foot 7”, Asian, and bald,” he says, opening his palms to the ceiling with a chuckle. “I’m not just being a dick.”

Today people are able to reach out, push back, and demand explanations for obvious missteps within the public sphere. The internet has changed the game, and with an estimated 0.3 percent of the U.S. population identifying as transgender, often Google’s most important role for transgender youth is to help demystify the trans experience. When I walk into the break room to take a breather from the chaotic set, I meet Jamie*, a 12-year-old trans girl and model hopeful sporting a pink tank with silky blonde hair. She doesn’t say much, and is soft spoken when she does, but her eyes are brimming with enthusiasm. Her mother explains that Asuncion invited them to tag along to observe, and how she’ll be more comfortable with her daughter’s participation in this industry with an exclusively trans agency. I ask Jamie how she’s enjoying middle school, to which she quietly answers that she likes it, telling me how her dog helps her pick her outfits each morning with an approving bark.

Claudia Charriez, however, a veteran model and showstopper, tells a grimmer tale of undergoing her transition in the unforgiving climate of the early ‘90s. She contemplated suicide at only 12 years old, unsure if her feelings of what she later understood to be gender dysphoria were crazy. “If my family had been even half as supportive as Jamie’s, I wouldn’t have had to leave home,” she says. Charriez went on to forge a modeling career amid judgment and rampant transphobia, including stints on both America’s Next Top Model and The Janice Dickinson Modeling Agency. Being represented by an agency that consists solely of transgender models, she explains, is a different experience that has freed her from the need to conform to preconceived notions of what a top model should be like. Asuncion repeatedly encourages the women to embrace their uniqueness. “Don’t aspire to have [another model’s, like] Angel’s body type because, [for example], Asians are built smaller. You can’t have that body. I really feel like you should just be the best you.”

While these women have found an ally in Asuncion, he is adamant that the transgender community at large needs more outsider support. The increased presence in the mainstream cultural conversation is powerful in its own right. But in order to forge a clear path for trans advocacy, the entire LGBT community must come together in support, he says—or even prioritize those who have further to go. Asuncion often puts his struggle as a gay man after that of the trans community. “I was at one of those marriage equality dinners, and all the men were like, ‘Gay people should be able to get married.’ It felt to me like I was at a table of ungrateful people,” he says. “Great, let’s demand marriage equality, but trans women can’t even use the right bathroom. Help a motherfucking trans sister out!” But he says he has hope. “If the bears, and the twinks, and even the lesbians can get it together,” he sees a cohesive future for the LGBT community. But right now, he’s focusing on a cohesive future for this burgeoning, groundbreaking agency.

He appreciates his clients, like ModaMob and Vogue Germany, that aim to advocate for trans rights, but eventually he wants to see his girls start to book more commercial work. (He offers Target as an example.) To Asuncion, a stronger move into the mainstream will signify a palpable change in America’s mentality toward gender. “If a person looks happy, pushing a shopping cart [in an ad], who cares what gender she is? Who cares?” he asks insistently. Soon the answer will hopefully be no one.

*Name has been changed to protect the privacy of the individual