“This is why I cry in the shower.” 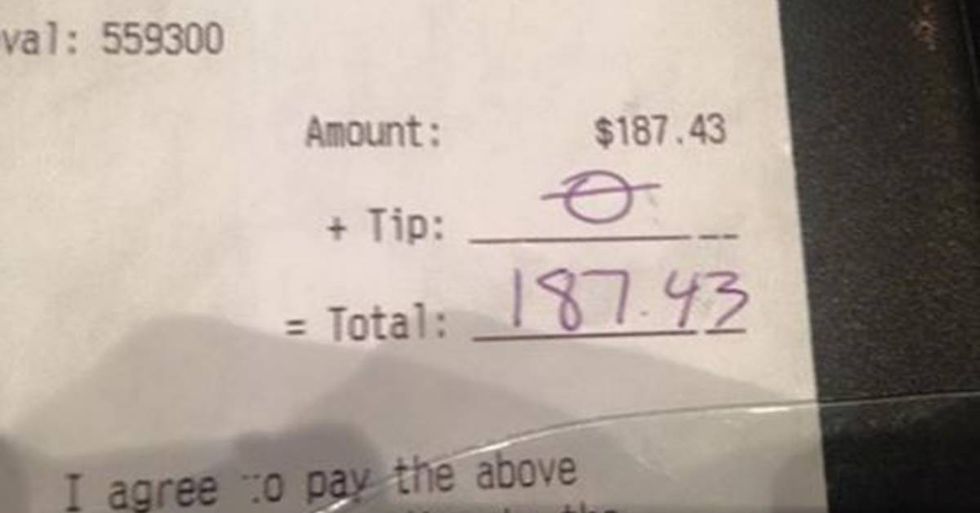 Being a server in a restaurant is hard work. You're on your feet all day, you have to deal with needy customers, and the pay can be downright terrible. In fact, most U.S. states permit employers to pay tipped workers less than the federal minimum wage. In 21 states, servers are paid only $2.13 an hour before tips. According to a report in The Wall Street Journal, “nearly 15% of the nation's 2.4 million waiters and waitresses live in poverty, compared with about 7% of all workers. They are more likely to need public assistance and less likely to receive paid sick leave or health benefits."

Cordova, a server at a P.F. Chang's in Colorado, received no tip on a bill totaling $187.43. A standard tip of 15% would have given Cordova $28.11. Tired of being stiffed by rude customers, she posted about the situation on Facebook, and it has been shared more than 12,000 times.

“This. This is the reason I work so much. This is why I cry in the shower. I STRUGGLE to put clothes on my daughter's back and food in our bellies because of THIS. You, are the lowest of the low. Whenever you feel like it's probably fine to not tip your server, that's one more bill stacking up because they're short on money. This is food for the week that our families will go without because you didn't think it was necessary, even after asking for everything under the sun and receiving it free of charge, mind you. This is one less basic necessity my daughter needs because even TWO more dollars is too much for you.
Every decision has a consequence. Servers are paid a base pay of $2-5/hr depending on the employer, so next time you don't want to tip, regardless of the situation prior to receiving your bill, think about how much you would have to work that week off $2-5/hr to feed your family, not just you. Could you pay your bills based on that pay alone? Could you feed your family AND yourself? Because that's what happens when you choose to not tip. Please, please tip your servers. Even if it was the worst service you've ever received. A 10% tip is a big enough slap in the face, this completely tore me apart. Don't even bother walking into a restaurant if you can't afford to tip. There's a McDonald's down the street if you're that cheap."

But things may be looking up for servers in the future. According to Eater, “seven states — including New York — have already increased or eliminated the lower tipped minimum wage and seven more are in the process of increasing or eliminating it altogether." This change is necessary because, according to the National Restaurant Association, by the end of this year, 12.9 million people will work in the restaurant industry, which will account for 10% of the U.S. workforce.

This article was originally published on January 24, 2019.