Paralympic Gold Medalist’s Thoughts On The Power Of Sports

Mallory Weggemann on returning to the pool and how inclusive sports can drive change. 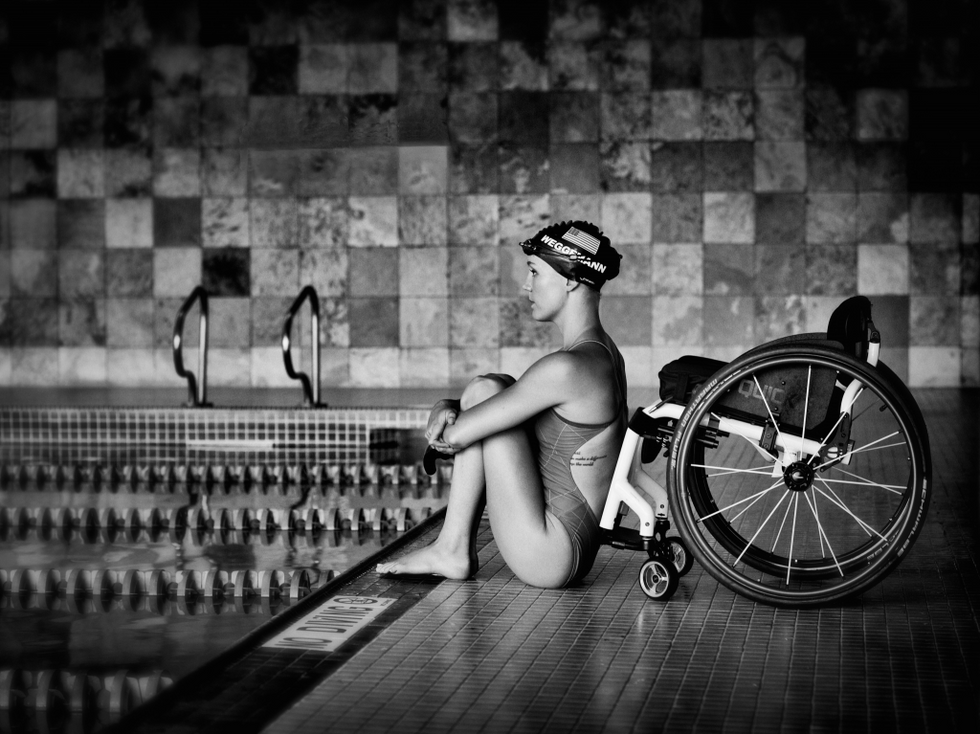 Mallory Weggemann has been a competitive swimmer since she was 7 years old.

In 2008, she went to the hospital to receive her third and final epidural injection that was supposed to help with debilitating post-shingles back pain. Instead, 18-year-old Weggemann was left a paraplegic with complete loss of movement from her abdomen down.

Determined to return to swimming, she was back in the pool just three months later. Her older sister found an article in the local newspaper about the Paralympic Swimming Trials at the University of Minnesota. Through the encouragement of her family, Weggemann attended the trials as a spectator with her sister and met several of the U.S. National Team coaches as well as her former coach, Jim Andersen.

Encouraged to join, Weggemann became a two-time Paralympian, winning medals in both the 2012 and 2016 Paralymic Games, and serves as an active voice for athletes of all abilities as a public speaker and board member on disability rights. And, despite a new medical setback three years ago — the development of a painful nerve condition called complex regional pain syndrome — Weggemann is still training to compete in Tokyo in 2020.

GOOD caught up with her to find out how her perception of ability is changing sports for good.

You’ve said your wheelchair can take you further than your legs ever could. What does that mean?

I look back, and there was a lot of heartbreak and a lot of loss with my injury but also a lot of blessings. I was just 18 years old. In so many ways, the biggest lesson I’ve gotten from this journey is to truly learn what it means to be alive and to live life with purpose. I didn’t really fully grasp that until life drastically changed for me. I’ve had so many more opportunities since my injury, and I think that’s because of the mindset. And I know that every moment truly is a gift because you never know when life can change.

What role have your coaches played in overcoming your injury?

I've had two significant coaches: one who coached me from when I was injured through the 2012 games and then one who coached me into Rio and will coach me going into Tokyo. Both of those gentlemen have served as just such fantastic role models in my life. My first coach was Jim Andersen. He was my first coach right after I became paralyzed and was the one who kind of had that impact on me initially where he never limited my capability. He never told me I couldn't do something. He was always right next to me being my cheerleader and pushing me to whatever level I wanted. And that really helped me change my own perception of what I was capable of after my injury.

Then as I looked toward the Rio 2016 Games, I had a very significant injury two years before, and I thought I was going to retire and be done. I ended up going back and working with my high school coach who coached me before I was injured and [who coaches me] now. He was my very first coach when I was a 7-year-old girl. He coached my sisters and I — all three of us — throughout high school. And I stayed in touch with him through the years. My coach from going into London had moved. I'd known Steve my whole life but never in this capacity. I knew every single day he had my back.

Why does community matter in overcoming adversity?

I've come to realize that the only way I've been able to accomplish what I have is because of the people I'm surrounded by and the importance of having people in your corner, whether that be parents, coaches, community support, teachers, mentors. With a strong community, you will get through whatever happens in life. That goes for youth athletes, too, but even as a 20-year-old athlete and person, you always need a community. You never get too old or too good for community.

In a sport like swimming — where you're literally by yourself unless you're on a relay — for the most part, you win by yourself. So often, everybody only sees you. They don’t see the tribe of people behind you, your teammates, coaches, trainers, medical team (in my situation), your family, your community. The only way that I returned to swimming after I was paralyzed was because I had an incredible community before my injury.

How can inclusion at the youth level change more than just sports?

I take enormous pride in being a Paralympic athlete, but how do we find a way to bridge adaptive sports and non-adaptive sports so we're bridging the two communities at the youth level? Think of a wheelchair basketball camp — maybe you know a young girl or boy wants to bring their friend who doesn't happen to be in a wheelchair or a soccer clinic for kids in the community where it doesn't mean that if you are a kid with a prosthetic, you can't show up and play soccer with your peers. I think if we start seeing more inclusion in sports in the field of play and finding ways to introduce it and they’re immersing themselves in each other’s communities, we won't see so much of the divide as they age.

And so I think that if we can find a way to use sports as a catalyst to drive greater inclusion on the field of play, we're going to continue to see that transfer into our communities, into our schools, into our churches, into our places of work. Those kids will soon grow to teenagers who will go to college and will grow into working professionals. And slowly, but surely, as our generation shifts, we will see that change.