The candidates entered the races on level fields, with Biden enjoying a slight delegate edge over Sanders. Biden's lead is now decisive, and there is a high probability he will emerge as the Democratic nominee.

Despite his victory, Biden continues to struggle with young voters. He faces difficulties in appealing to the most ideologically extreme wing of the party, which also tends to be younger. Sanders would have required unprecedented youth turnout to beat Trump in November. By some estimates, youth turnout would need to increase some 30 percentage points over 2016.

Still, youth turnout in the general election has historically slightly exceeded 40 percentage points. Biden will need to appeal to this demographic, if he is to stay competitive against Trump.

Exit polling in Michigan further clarified the ideological lane the party is likely to occupy this fall. It is becoming clear the party will adopt a center-left agenda.

The 2020 Democratic primaries are frequently cast as referenda on ideological extremism versus moderation.

"I was told at the beginning of this whole undertaking that there are two lanes, a progressive lane that Bernie Sanders is the incumbent for and a moderate lane that Joe Biden is the incumbent for, and there's no room for anyone else in this," Elizabeth Warren told the Washington Post. "I thought that wasn't right, but evidently it was." 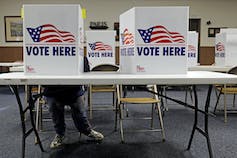 Sanders enjoyed a 34 percentage point edge among strong liberals. Biden enjoyed an almost equal lead among moderates and conservatives. But even more revealing was Biden's 18 percentage point lead in Michigan or all over in Michigan among people who described themselves as "somewhat liberal."

In the Michigan exit poll, 40% described themselves as "somewhat liberal," also known as center-left voters. The fact that Biden is drawing strong support from center-left voters is important for a simple reason: They constitute a large share of the Democratic coalition.

Data from the 2016 Democracy Fund's Voter's Study survey reveals a similar dynamic. At 27%, center-left is the second most popular choice among Democrats, behind "moderate or conservative."

Biden's lead among this group shows he is making clear inroads with a large share of the party.

Chris Weber is an Associate Professor in the School of Government and Public Policy, University of Arizona

From Your Site Articles
Related Articles Around the Web
centrism