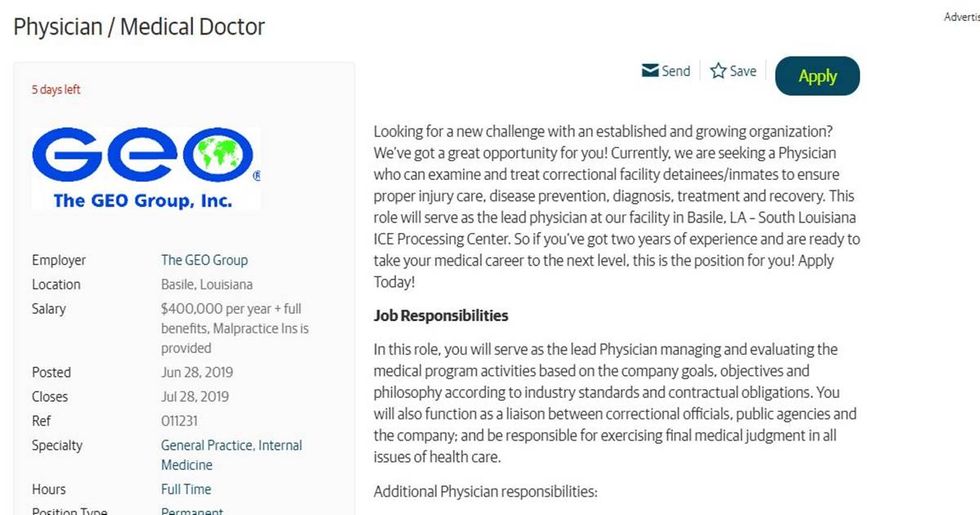 The Journal of the American Medical Association (JAMA) removed a job posting from GEO Group on Tuesday, July 23, after an op-ed by Dr. Ranit Mishori was published in The Washington Post.

The posting was for a lead physician at the Louisiana ICE Processing Center in Basile, Louisiana.

The job posting caught Mishori's attention for three major reasons: the salary, its request for a commitment to “the objectives of the facility," and the lack of a board certification requirement.

Mishori is a family doctor and a member of Physicians for Human Rights.

The job pays $400,000 a year but only requires two years of experience. “Well, it's very unusual, especially for somebody who is a general practitioner," Mishori told NPR. “This is way more than I'm making, so the job really caught my attention for a variety of reasons."

The job posting also had a creepy line that stood out to Mishori. GEO Group is looking for physicians who are “philosophically committed to the objectives of this facility." An archived version of the site shows the line was altered to ask for a doctor who can operate “based on the company goals, objectives and philosophy according to industry standards and contractual obligations."

Mishori believes that GEO's request for philosophical loyalty to its cause could put doctors in an ethical bind known as “dual loyalty."

“Dual loyalty is something that relates to the potential conflict between clinicians' duties to their patients and their obligations to their employers," Mishori told NPR. “When these organizations have sometimes questionable tasks to fulfill, that becomes a very, very serious almost ethical minefield, I would say."

If a physician's loyalty to the company and ICE's objectives is paramount, it could cause the physician to be silent about abuses at the facility. In addition, an immigration hard-liner may be less likely to care for the immigrants' health.

Misori was also concerned that GEO Group did not have board certification as a requirement.

In response to the controversy, a GEO Group spokesperson said, “In all of the facilities that we manage on behalf of the government, we are deeply committed to delivering culturally responsive services in safe and humane environments and to treating everyone in our care with dignity and respect," The Hill reports.

“This is the only commitment we expect from all of our employees, including our medical professionals," the statement continued.

At the end of the job posting, GEO Group claims to be an “Equal Opportunity Employer."