Transparency: GOOD's Most Popular Infographics of 2010

A look back at the infographics that drew the most attention, on topics from happiness to Burning Man 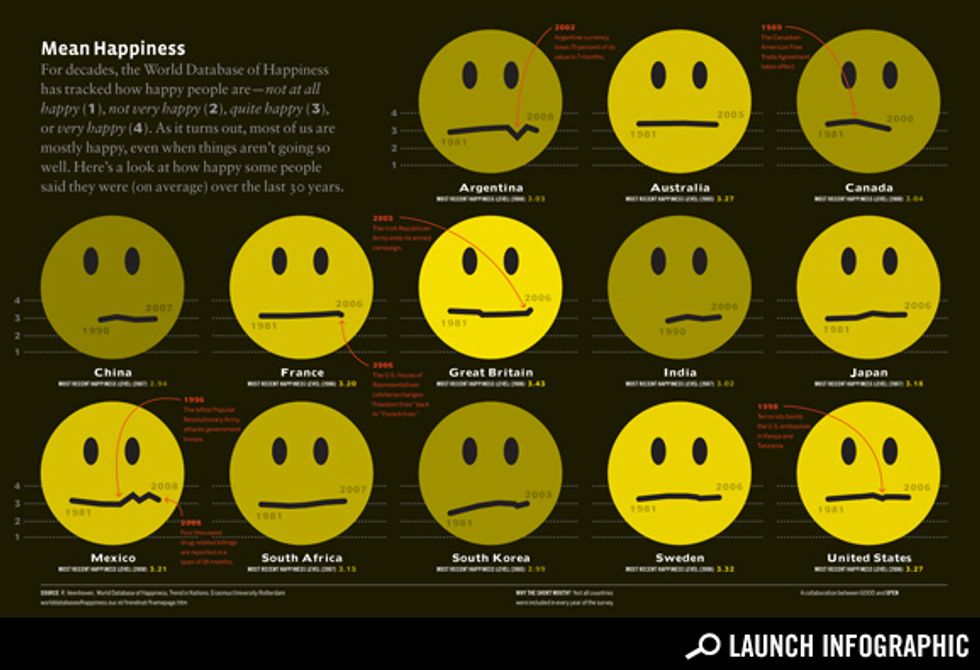 In the last year, we've released a nearly 100 original infographics. Here is a look back at the ones that drew the most attention, on topics from happiness to Burning Man (click on the images to launch the infographics).

This piece, which tracks happiness in countries over time, was designed by OPEN. See all their work for GOOD here.

This piece, by Column Five Media, showed how much money different religions have. Hindus are doing quite well. You can see all of CFM's work for GOOD here.

Stanford Kay's piece looked at the books that parents most often ask to have removed from libraries. Gay penguins, Twilight's vampires, and Holden Caufield all made the cut. See all of Kay's work for GOOD here.

This piece, which compares the pedestrian fatality rate in European and U.S. cities, is by Amanda Buck. See all of Buck's GOOD work here.

5: Someone in America Loves You

Also by OPEN, this piece looks at American sentiment about countries around the world with some cheeky postcards: "Welcome to Iran. It's Radical!"

Another piece by Stanford Kay, showing how many millions of prescriptions for psychiatric drugs are written in America.

7: How You Will Get Hurt at Burning Man

Just in time for a trip to the playa, this piece by Hyperakt looked at all the injury reports at the festival for the last three years. See more of Hyperakt's work with GOOD here.

Governments are constantly asking Google to remove sensitive information from its search engines. This piece, by Mgmt.design, looks at which governments make the most requests, and for what reasons. See all of Mgmt's work for GOOD here.

After North Korea's attack on its southern neighbor, we produced this piece, also with Column Five, on the warring nations' fighting capacity.

Design Language's piece looked at who had given aid to Haiti just a few weeks after the earthquake. Note that these numbers are certainly no longer accurate, but they do show who was the fastest to react. See all of Design Language's work with GOOD here.