Watch out for falling furniture 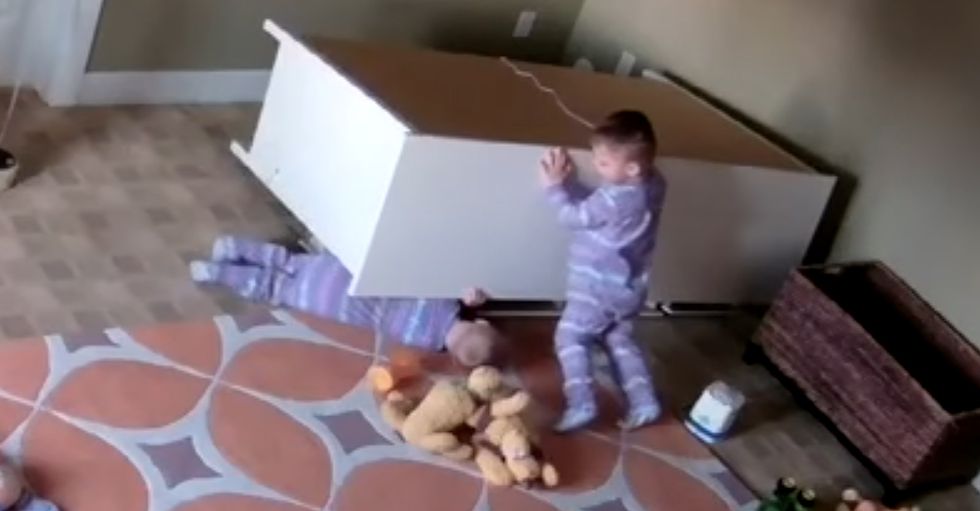 Early Thursday morning, Kayli Shoff’s 2-year-old twin boys were playing in their home in Orem, Utah. Wearing matching blue pajamas, the boys climbed onto a dresser, the nearest thing to climb on in their bedroom.

As twin Brock wedged himself inside a drawer and twin Bowdy hung from the edge, disaster struck and the dresser toppled, trapping Brock underneath.

In a state of shock, Bowdy looks around for help. His mother hadn’t yet noticed the incident on her bedroom baby monitor. Shoff later told NBC News that nobody in the house heard any thuds or cries.

After some hesitation, Bowdy decides to climb on top of the furniture, applying more pressure onto his crushed twin, and his attempts to lift the dresser fail. Then, in a heroic feat of leg strength, he successfully pushes the dresser off Brock, allowing him to roll out and escape.

As video of the incident has spread online this week, Shoff has used the opportunity to preach the importance of anchoring furniture to walls to prevent tipping. The dresser that fell on Brock is made by Ikea, which recently paid $50 million to the families of children crushed and killed by tipped Ikea dressers.

“I think we’ve made a big impact on people wanting to secure their dressers,” Shoff said. “You need to tie your dresser down today because honestly, if you wait a day or two, you’re just not going to get it done.”