A guy asked why his dog had suddenly become so protective of his wife — the Internet guessed the right reason.

The online community came through in a big way. 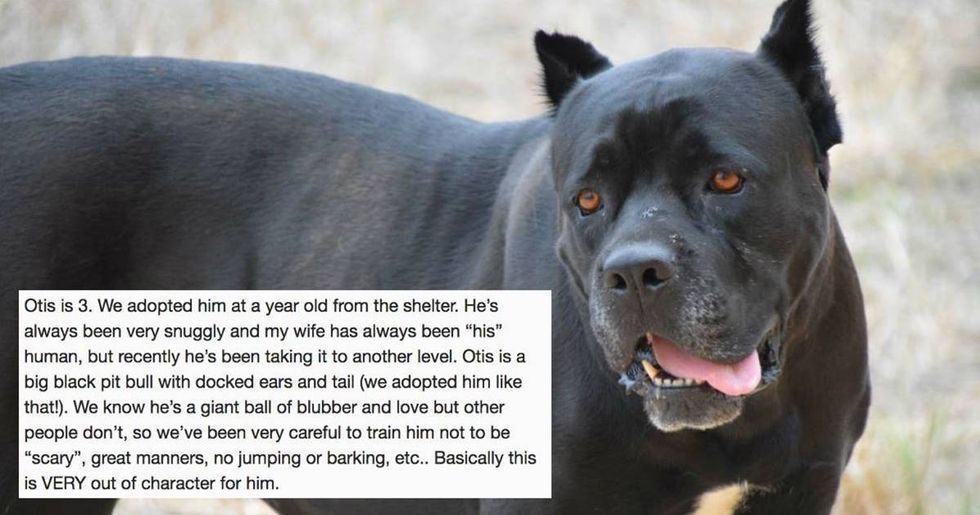 Reddit user Girlfriendhatesmefor's three-year-old pitbull, Otis, had recently become over protective of his wife. So he asked the online community if they knew what might be wrong.

“A week or two ago, my wife got some sort of stomach bug," the Reddit user wrote under the subreddit /r/dogs. “She was really nauseous and ill for about a week. Otis is very in tune with her emotions (we once got in a fight and she was upset, I swear he was staring daggers at me lol) and during this time didn't even want to leave her to go on walks. We thought it was adorable!"

Girlfriendhatesmefor began to fear that Otis' behavior may be an early sign of an aggression issue or an indication that the dog was hurt or sick.

So he threw a question out to fellow Reddit users: “Has anyone else's dog suddenly developed attachment/aggression issues? Any and all advice appreciated, even if it's that we're being paranoid!"

The most popular response to his thread was by ZZBC who asked if she might be pregnant.

The potential news hit Girlfriendhatesmefor like a ton of bricks.

A few days later, Girlfriendhatesmefor posted an update and ZZBC was right!

“The wifey is pregnant!" the father-to-be, wrote. “Otis is still being overprotective but it all makes sense now! Thanks for all the advice and kind words! Sorry for the delayed reply, I didn't check back until just now!"

Many Redditors reponded with similar experiences.

So why do dogs get over protective when someone is pregnant?

Jeff Werber, PhD, president and chief veterinarian of the Century Veterinary Group in Los Angeles, told Health.com that “dogs can also smell the hormonal changes going on in a woman's body at that time." He added the dog may “not understand that this new scent of your skin and breath is caused by a developing baby, but they will know that something is different with you—which might cause them to be more curious or attentive."

The big lesson here is to listen to your pets and to ask questions when their behavior abruptly changes. They may be trying to tell you something and the news may be life-changing.