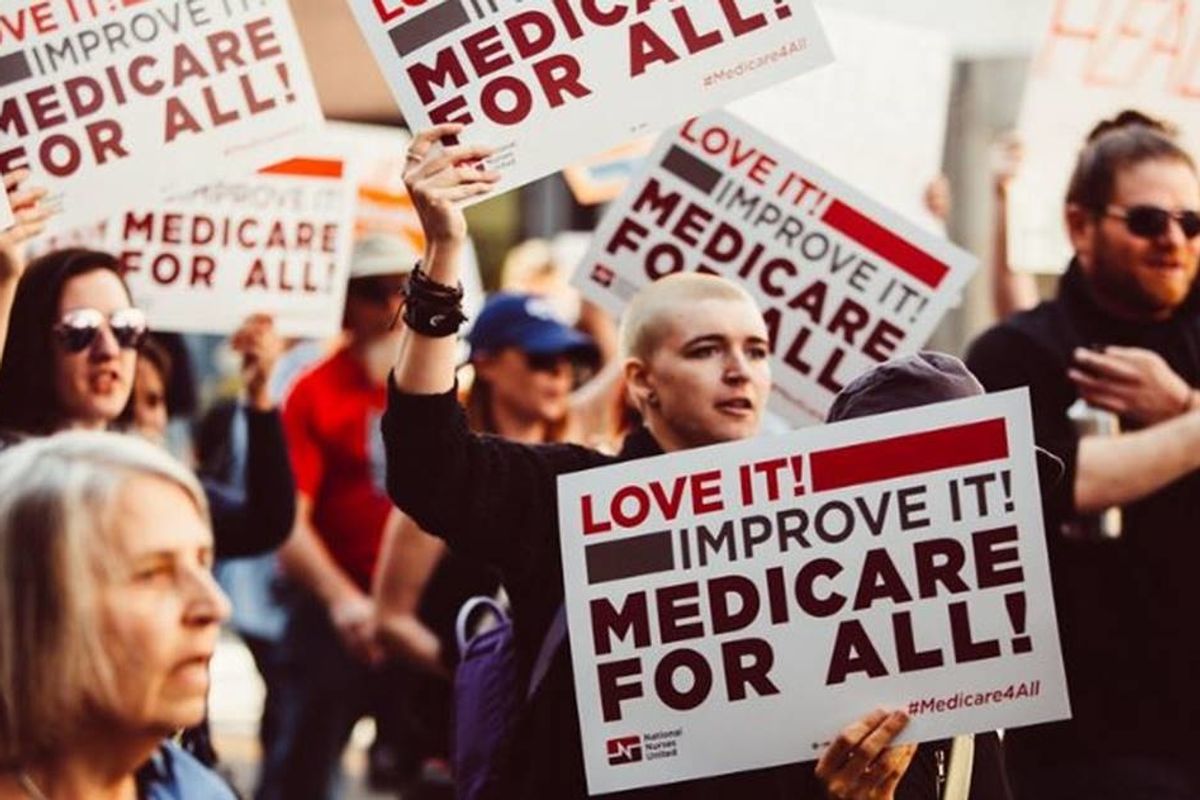 All four of the national co-chairs of Sen. Bernie Sanders' 2020 presidential campaign on Friday applauded the more than 700 delegates to the Democratic National Convention who have so far vowed to vote against the party's platform if it doesn't include a plank supporting Medicare for All.

"Increasingly, the absence of support for Medicare for All from the top of the Democratic Party is bad politics as well as inhumane."
—Norman Solomon, RootsAction

"Many hundreds of delegates are speaking out now with clarity to insist that Medicare for All belongs in the Democratic Party platform," the statement continues.

"They are correct to never waver in this fight for healthcare as a human right. During the last few months, millions of people in the United States have lost their jobs. They should not lose their healthcare."

The co-chairs released their statement after the DNC Platform Committee on Tuesday overwhelmingly voted down an amendment that would have inserted support for Medicare for All into the Democratic platform, which is set to receive a final vote at the virtual Democratic convention next month.

Turner called the Platform Committee's vote against the single-payer amendment "shameful as hell."

We're in a health care crisis and millions have lost their health coverage. It's clear that this system isn't worki… https://t.co/ollJDX1WkJ
— Ro Khanna (@Ro Khanna)1596212460.0

Norman Solomon, national director of progressive advocacy group RootsAction, welcomed the comments from the Sanders campaign alumni as "a strong statement of solidarity" and "a boost to the organizing now underway with delegates to confront the failure of the party's pending platform to truly treat healthcare as a human right."

"One nationwide poll after another, as well as primary election exit polling, have shown that Medicare for All has majority support," Solomon said in a statement Friday. "Increasingly, the absence of support for Medicare for All from the top of the Democratic Party is bad politics as well as inhumane."

"If there was no debate over healthcare during party convention season, it would play into the GOP's hands."
—Progressive Democrats of America

More than 700 delegates to the Democratic convention have signed a petition pledging to vote against the party platform if it doesn't endorse Medicare for All. While most of the signatories are Sanders delegates, organizers of the petition say some delegates for presumptive Democratic nominee Joe Biden have also signed on.

But as the Washington Post's Dave Weigel reported earlier this week, "it would take a mass exodus of Biden delegates" to pass any amendments to the platform during the convention scheduled to begin on August 17.

"As the party's 'virtual' convention plans evolve, it's not clear how delegates could continue to fight on [a Medicare for All plank]," Weigel noted. "At a traditional convention, the platform would be voted through during regular business, in the main hall.

Democrats have reduced the public-facing part of the convention to just eight hours split over four nights, time expected to be spent on a carefully shaped introduction of Biden, his running mate, and down-ballot candidates."

While the push to include Medicare for All in the final Democratic platform may fail, Progressive Democrats of America (PDA) said the hundreds of DNC delegates who are voicing dissent have "ensured that the call for a humane, rational, cost-effective healthcare system will be heard during the convention—and this will benefit the Democratic Party."

"If there was no debate over healthcare during party convention season, it would play into the GOP's hands," PDA added. "The majority of Americans, especially Democrats and independents, recognize the failure of our current employer-based private health insurance system.

Covid-19 has laid bare this failure, and proves the need for Medicare for All is more urgent than ever."

From Your Site Articles
Related Articles Around the Web
election
Trending Topics
THE DAILY GOOD
Start your day with something GOOD.
Trending Stories
The Planet