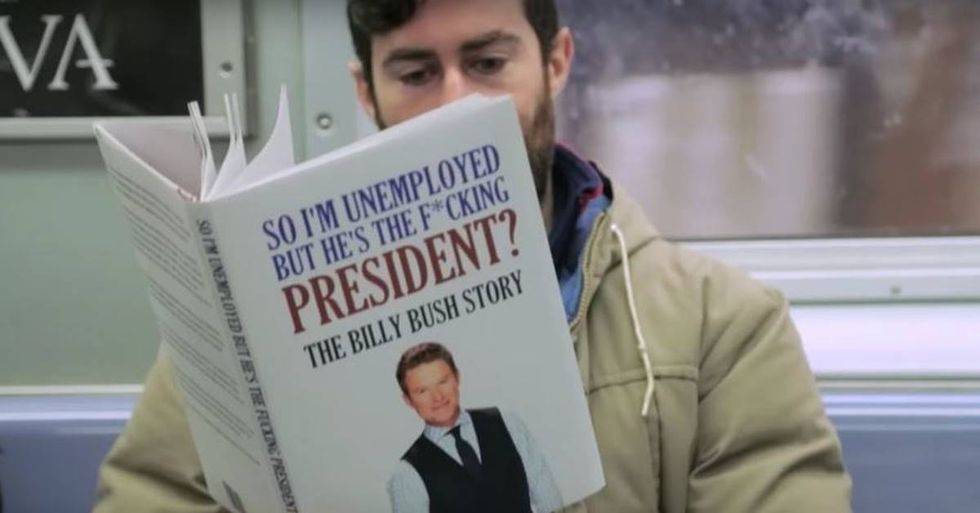 Last week, comedian Scott Rogowsky gained national attention when a video of him reading fake Donald Trump-themed books on the New York City subway went viral. Two of his buddies secretly filmed commuters busting up after noticing Rogowsky reading books with titles such as “Prejudice and Prejudice” by Mike Pence, “Fantastic Nukes & Where to Drop Them” by Newt Gingrich, and “We’re Going to Build a Wall and Mexico is Going to Pay for It” by Trumpty Dumpty.

But Rogowsky’s project isn’t just about laughs and irritating Trump supporters. After the video went viral, he announced that all of its proceeds will be donated to Planned Parenthood and the ACLU. So GOOD took a minute speak with Rogowsky about how his hilarious video came to be.

Where did the fake books idea come from?

The idea sprouted a couple years ago when I was reading my friend’s book, Baratunde Thurston’s “How to Be Black” on the train. I thought of how weird it might appear to my fellow passengers seeing a vehemently white guy reading a book with such an incongruous title. Eventually, I thought up enough outrageous titles to make a video, and I produced the first one for Playboy in April, 2016. When that went viral, I followed it up with a sequel six weeks later. I wasn’t thinking about making a third video, but after the tragic events of Election Day, I felt my best possible response would be to go back to the well and donate the proceeds of the video to ACLU and Planned Parenthood.

How did you capture the reactions of your fellow subway riders?

I have two cameramen, Sami Haavisto and Daniel Zimmer, who have filmed all three videos. They hold their cameras around their neck, slyly framing up and adjusting focus to capture the reactions.

Did anyone get angry with you on the train?

A very angry foreign man (possibly Russian?) began frothing at the mouth when he saw the “How To Succeed in Business Without Paying Your Contractors.” It was hard to make out what he was saying but he kept screaming about Clinton, and I’m fairly certain he snuck an anti-semitic slur in there.

Have you considered writing any of these fake books?

Hell no! Do you know how hard it is to write a book?

Your video has over 500,000 views. Has the public’s reaction surprised you?

Elizabeth Gilbert, author of “Eat, Pray, Love” reached out to me over Twitter asking if she could have the “Eat, Pray, Grab Pu**y” book to march with in D.C. on Saturday at the Women’s March. Yesterday, we met at the lobby of her apartment, I gave her the cover, and she surprised me by writing a $5,000 check to Planned Parenthood in my name. She also inspired me to head down to D.C. for the march, so I’ll be there, too!

How would you explain the Trump phenomenon to someone from outside of the U.S.?

Trump is a mean girl, and the people who voted for him are the ugly, unpopular kids who wanted to get in his clique.

Scott Rogowsky’s late night talk show “Running Late with Scott Rogowsky” returns to Union Hall in Brooklyn, on Jan 22 at 8 pm. You can follow him on Twitter and Instagram @RunningLateShow.