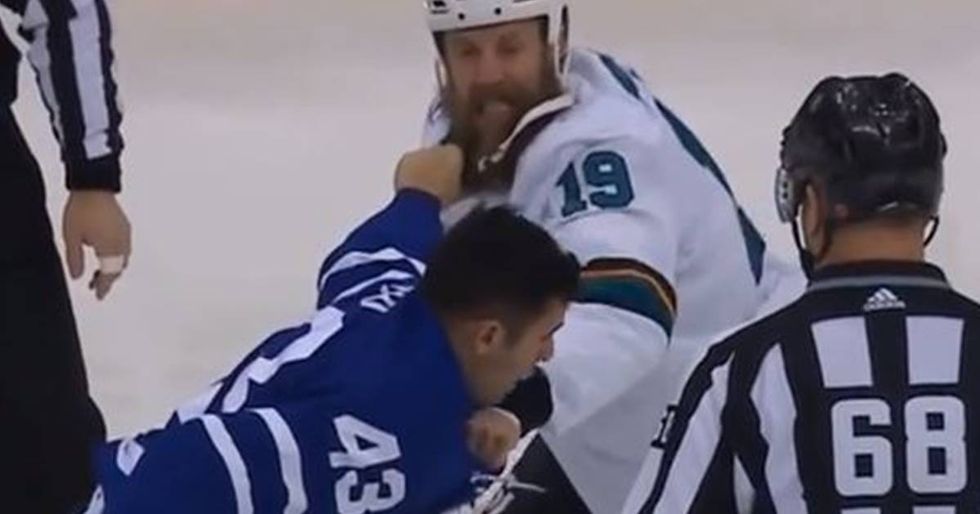 There’s an old, tired, and unfunny hockey joke that goes something like this: “The other day I went to a fight and a hockey game broke out.”

Last night in Toronto, it looked a lot like attendees bought tickets to a fight, because after just two seconds of play, San Jose Sharks center, Joe Thornton, and Maple Leafs center, Nazem Kadri, were grappling on the ice. The two had choice words and decided to settle each other’s hash before the game got in the way.

Things got a little hairy between Nazem Kadri and Joe Thornton https://t.co/QpWkUDNOCF pic.twitter.com/U2m7f1fvqk

During the skirmish, Kadri’s hand got tangled up in Thornton’s beard and he ripped out a chunk. “I have no idea how that happened. I thought I was a hockey player, not a barber,” Kadri told The Mercury News. “I didn’t mean to grab him there, I couldn’t really reach him. He’s a big boy across the shoulder. I felt like I just grabbed him in the middle of his jersey and came down with a handful of hair.”

After the fight, the clump of hair was collected by the Sharks head athletic trainer, the appropriately-named, Ray Tufts. For the head coach of the Sharks, Peter DeBoer, the beard-ripping episode was the first he’d seen in a long career. “I’ve seen a lot of things over 25 years of coaching,” he told reporters after the game. “I haven’t seen a clump of beard on the ice before.”

While having your beard ripped right off your face seems like a painful thing to live through, Thornton was all smiles, crooked beard and all after the game. Although he has yet to comment on the issue, his face shows that — for a hockey player — getting your beard ripped out is just another day at the office. Heck, it may even be something to brag about.

Congratulations to Joe Thornton on getting his first career on-ice beard trim! pic.twitter.com/VGg2TwFaIX

The Maple Leafs would go on to beat the Sharks 3-2 after a shootout.