"I am not ashamed of what I wrote." 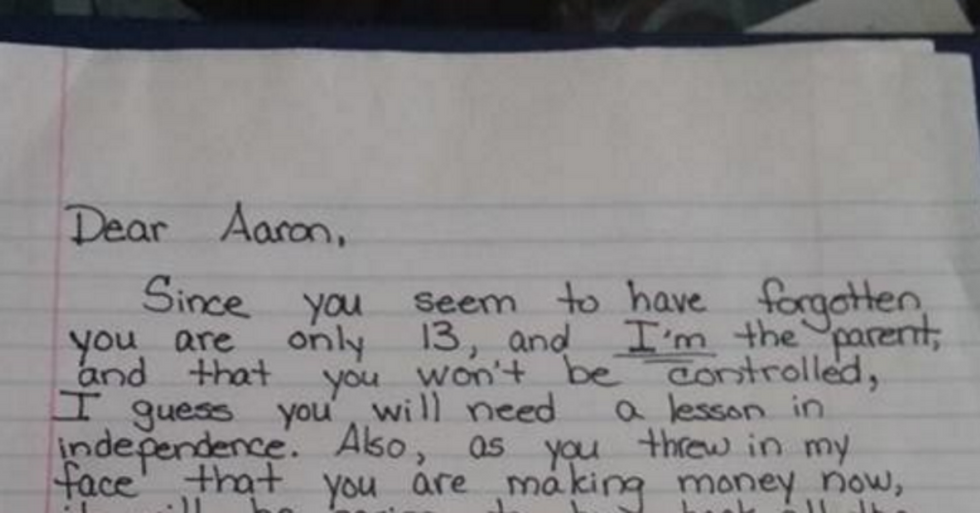 Heidi Johnson's son was 13, deeply in adolescence, and in that stage where he lashes out. He told her he shouldn't have to deal with her rules and should be independent. So she wrote a strict but loving “Mom's not a fool" letter.

She wrote on Facebook how her son reacted to the letter:

“He came home, saw the note, crumpled it on the floor, and stormed out of the apartment. I have always encouraged him to take a walk when he is upset so that he can collect his thoughts so when we try to talk, we are able to talk, and not just yell at each other. I do the same thing — sometimes, I just need to walk away and collect myself. I am not above admitting that. He was still livid when he got home. He decided to stage a 'sit in' in my room, where he did laugh at me and repeat, 'Really? What are you going to do? You can't take my stuff,' etc. He was asked to leave my room, and when he could be respectful, and I was more calm, we would discuss it further. He went to his room, and after about an hour, he had removed some electronics and items I missed that he felt he should have to earn back for his behavior. He apologized, and asked what could he do to make things better and start earning items back. He earned his comforter and some clothes right back. I did leave him some clothes to begin with, just not the ones he would want to wear every day. He also had some pillows and sheets, just not his favorite ones."

She decided to post it on Facebook, the way one does to friends for a laugh and connection. She neglected to make it “private," and soon comments and shares proliferated, including admonishments from strangers who thought she was a bad parent.

Now she had to deal with a bigger teenager: the internet and its commentariat. But Johnson remained level-headed and wrote another Facebook post, clarifying.

\n“It's out there; and I am not ashamed of what I wrote... I am not going to put my 13-year-old on the street if he can't pay his half of the rent. I am not wanting him to pay anything. I want him to take pride in his home, his space, and appreciate the gifts and blessings we have."\n
She explains that he is more grateful because of it, and also that he has slowly earned back things and dealt with sacrificing others. Then she lists her very organized and succinct rules of the house:

1 – Do your best in school! I don't expect a perfect 100%, but I do expect that you do your best and ask for help when you don't understand something.

2 – Homework and jobs need to be done before you can have screen time.

3 – Jobs are emptying the trash, unloading the dishwasher, throwing away trash you make in the kitchen, rinsing dirty dishes, making your bed daily, pick up bedroom nightly, and cleaning your bathroom once a week.

4 – You must complete two chores a day. Each day of the week with the exception of Sunday has a room that we work on cleaning. He has to pick two chores for that room. For example, if it is the living room he can choose two of the following options: dust, vacuum, polish furniture, clean windows, mop the floor.

5 – Be respectful and kind with your words — no back talking, no cussing at me.

7 – Make eye contact when being spoken to, and be an active listener.

“You know what.. this hasn't hurt our relationship. He and I still talk as openly as ever. He has apologized multiple times... And… he is trying harder." Her son is earning things back little by little, and appreciating it more than he did before.

“This came down to a 13-year-old telling his mother she had no right to enforce certain rules, and had no place to 'control' him. I made the point to show what life would look like if I was not his 'parent,' but rather a 'roommate.' It was a lesson about gratitude and respect from the very beginning. Sometimes, you have to lose it all to realize how well you really had it."