Mom praises teen boy for the way he helped her daughter with a period emergency. 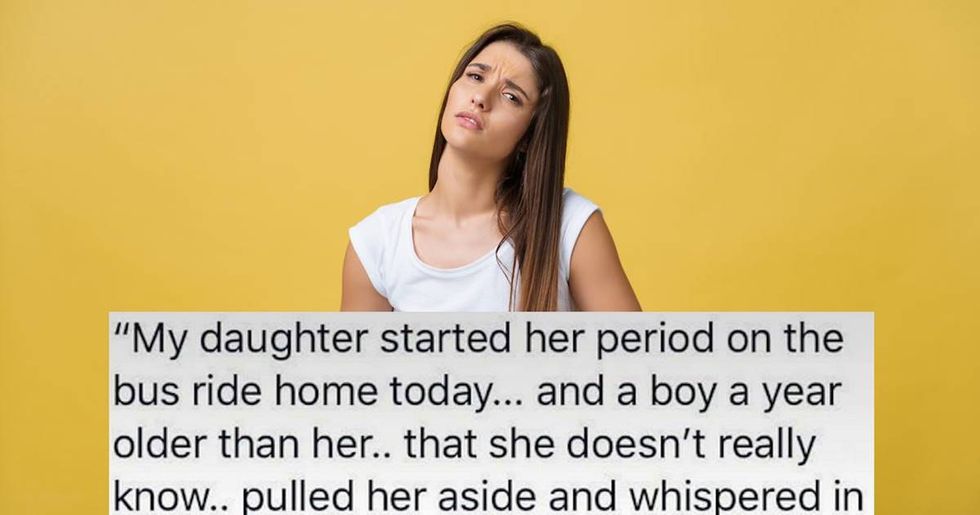 This article originally appeared on 02.21.19

I know firsthand that getting your period is never a convenient event, especially when it's your very first one and you don't have tampons or pads (or diva cups ooh la la) handy.

Depending on what you're wearing, a leak can show up in ways that announce your cycle to the whole world — and when you're a teenager that can invariably lead to teasing from cruel peers.

Womanhood can truly feel like a curse when you first enter it.

Most of the time, when we hear embarrassing period anecdotes, the girl in question is riding solo with her shame-stained pants, or maybe there's a kind woman with tampons in the public restroom.

It's rare that a guy, let alone a teen boy, is the unlikely hero in a tale of periods. However, a recent Reddit post served as the delightful exception to the rule of terrifying teen boys.

When a boy noticed his female classmate's period stain on the bus, he took the high road rather than making her a punchline.

“My daughter started her period on the bus ride home today. A boy a year older than her...that she doesn't really know...pulled her aside and whispered in her ear that she had a stain on the back of her pants and gave her his sweater to tie around her waist so she could walk off the bus. She said she was kind of embarrassed and originally said it's okay, but the boy insisted and told her 'I have sisters, it's all good!' If you are this boy's mom, I want to say thank you and that you are raising him right!! We hear so many bad things about today's youth and I wanted to share something positive!"

People on Reddit were happy to hear about such a mature and positive exchange between the teens, particularly how the boy expressed empathy without even knowing her well.

The whole exchange is a testament to how important it is to educate kids about how bodies of all genders work, so it's normal and not shameful.

“What an awesome kid," Redditor Imrhien wrote. “This highlights the importance of teaching boys about girls bodies, and vice versa. Understanding engenders compassion."

It's also notable how awkward it may have been for him to approach her, one of the reasons teens often take the low road is because kindness is a form of vulnerability.

“I'm guessing neither your daughter nor the boy are very old, maybe around 15," cli7 wrote on Reddit. “It would be so tempting to make fun of her. And even if not that, very awkward to have this conversation with a stranger. He must have been awfully nice for your daughter to react how she did I have a feeling your daughter made a friend for life."

In short, this is the right way to raise and kind and respectful kid.

“This is how we should raise our sons and daughters," Redditor binarydaakuwrote.